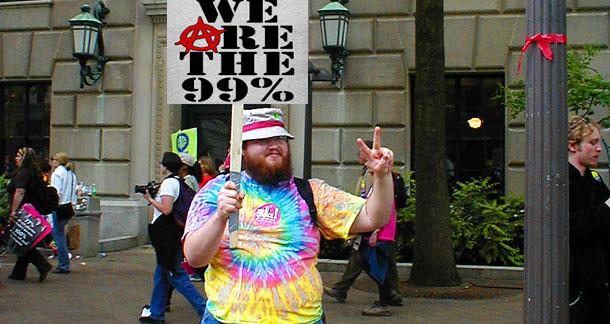 The Occupy Wall Street movement is getting some support from the literati, with heavy hitters like Salman Rushdie and Neil Gaiman publicly pledging their allegiance to the protestors.

The manifesto on the website Occupy Writers doesn't mince words:

We, the undersigned writers and all who will join us, support Occupy Wall Street and the Occupy Movement around the world.

What follows is a very long list (one that's growing every day), of authors who support the Occupiers.

The Occupy Writers site was created by Jeff Sharlet, a journalist and author from Dartmouth College, and Kiera Feldman, a Brooklyn-based journalist, with help from Tin House and n+1. This isn't the first time the publishing world has tipped its hat toward the protestors. Two weeks ago we wrote that The Writer's Guild of America East was lined up behind them.

Meanwhile, this was a tumultuous weekend for the Occupiers. There were approximately 92 arrests across New York City, including 45 during a march on Times Square and 24 at a Citibank sit-in in the West Village. This is on top of continued allegations of police brutality.

None of that seems to be deterring the protestors. Occupy moments are taking root in cities around the world, and just from my own observations (I walk by their home base at Zuccotti Park on my way to and from work), the crowd gets a little bit bigger every day.

A Cheat Sheet to the 2019 Booker Prize Longlist Nominations

EricMBacon from Vermont is reading The Autobiography of a Corpse October 17, 2011 - 9:21am

"Famous authors pledge support to Occupy Wall Street even though many of them are probably dirty 1 percenters."

This is what the Facebook post read. In truth, I doubt any of them are 1 percenters. You have to be filthy rich to be in that bracket. No one is against being rich, but there is such a thing as too rich by means that are unjust. That makes sense to me.

Joshua Chaplinsky from New York is reading a lot more during the quarantine October 17, 2011 - 9:47am

True, that. Just being facetious.

Is there such a thing as being "too rich", if it is done ethically and legally? This Occupy movement has me questioning all our values as humans and where we place that value. Honestly is an actress who makes $20M for a silly romcom, launches a new perfume every year and endorses all kinds of brands for profit part of the 99%? Maybe they are "techincally"? And yet, I do not know how they could be, but it is not my place to question their wealth or demand them to not be paid that much. However, I think it is in bad taste... I really do. Our country worships at the feet of wealth and fame, I hope this whole movement sparks dialogue about what we all stand for in this country, individually and collectivly. More change has to happen than what is taking place, this is a good start, but we have to question ourselves too.

I'm new to this site... I look forward to many great discussions and articles.

Tim from Philadelphia is reading approximately eight different books. Most unsuccessfully. October 17, 2011 - 10:18am

Little Brother is watching, Brandon. Go with what you feel is right but it would be a shame to lose your place at the cool kids table because of a simple signature. Just sayin' dude.

So are the authors donating to the cause the advances and royalties recieved from their evil corporate publishers?

Ah good, this will help me pare down my reading list!

Signed it. Proud to be included.