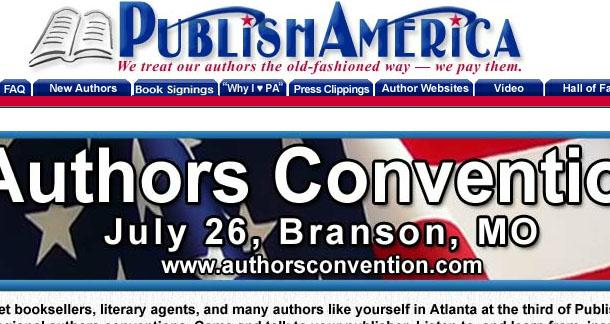 Three authors are suing PublishAmerica, a print-on-demand "publishing house" founded in 1999, claiming that the company makes more money shaking down its authors for fees than by selling books.

The plaintiffs claim the company misrepresents its services in its contracts with authors, which gives PublishAmerica the rights to their work for between seven and ten years. Fees that authors paid ranged from less than $30 to several hundred dollars.

They allege that the publisher, among other things, charges for services that traditional publishers perform at no cost to promote and sell books, misrepresents the company's ability to get writers' work on bookstore shelves or into the hands of larger publishers or celebrities, and publishes books with little or no editing and then charges the authors to have corrections made.

PublishAmerica shot back that the authors' claims "distort the facts, omit relevant information, and in some cases are just plain false."

Look, I'm not going to say that PublishAmerica is full of shit and a good example of the scams pervasive in the publishing industry, because that's libel.

But last year, PublishAmerica said that for a fee of $49, they'd bring your book to J.K. Rowling, to get her comments and criticism. Rowling's lawyers issued a cease-and-desist letter in response. The company also happens to have an F rating from the Better Business Bureau. So, there's that to consider.

Anyone have any experience with PublishAmerica?

Five More Legal Issues All Writers Need To Be Aware Of: Rights, Royalties, Negotiating and more

Wow. Once upon a time, before CreateSpace, when I was researching these options back in oh, 2006 or so, PublishAmerica seemed like one of the more attractive ones. . . That's when you had to order in bulk and stock your own inventory. But soon after that, other companies allowing you to print one at a time on demand and not have to deal with the order fulfillment yourself changed that, so I turned elsewhere.

Regretfully I have had dealings with them. It was when I was new and green and embarrassingly naive. They're assholes, thieves and liars, but this is nothing new. The lawsuits will continue and so will they.

Funny, I was looking at this web site the other day and I could have told you that this was what this company was about just from the web site itself.  If it sounds too good to be true, it is 99.99999999% of the time.