Author of ‘The Anarchist Cookbook’ Calls for Book to be Withdrawn 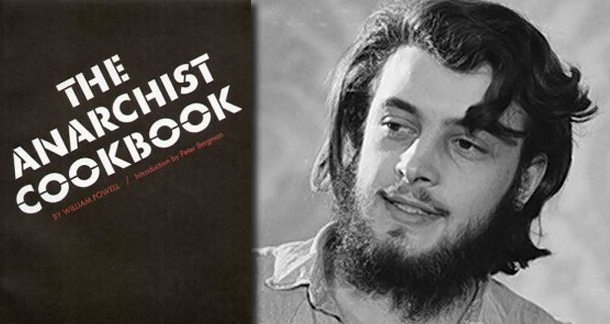 William Powell was 19 when he wrote one of the iconic terrorist handbooks of the 20th Century, The Anarchist Cookbook. Now, after the most recent school shooting in Colorado, he has called for the publisher to delist the book.

"The Anarchist Cookbook should go quietly and immediately out of print,” says William Powell, who wrote the book as a stern 19-year-old, an opponent of the Vietnam War who felt violence was justified if it could prevent even greater violence in the process. He has since renounced that position, but never so forcefully, telling NBC in an email that “it is no longer responsible or defensible to keep it in print.”

The book has been linked to a number of high-profile terrorism cases over the years, including Timothy McVeigh’s bombing of the Federal Building in Oklahoma City in 1995 and the tragedy at Columbine. But having sold over 2 million copies and now being freely available on the internet — web searches for the book have apparently risen by “more than 5,000 percent” in the last decade — the genie may well and truly be out of the bottle. And the publisher has no real interest in pulling the title, either. Hell, it’s even available on Amazon.

"You know, we don’t ban books in America,” says Billy Blann, who bought the rights to the Cookbook in 2002, just as digital sales took off. Blann is the founder of Delta Press, “the world’s most outrageous catalog,” as he calls it, and the purveyor of guides on Justifiable Homicide, The Poor Man’s Nuclear Bomb, and The Butane Lighter Hand Grenade.

Yeah, right. Having bought the rights to the book in 2002, Blann says it’s his most popular book. “I’m sure I got my money back,” probably says it all. But he is correct in that freedom of speech is a protected right: we may not always like what people say, but we can’t stop them from saying it.

Powell is very apologetic for his book and the results of his work — hardly a surprise for someone who obviously has a strong sense of ethics — but he has no say in the matter. The advent of the internet makes this moot as anyone who’s ever tried to delete something from the Web knows. Is there anything we can do about it? I don’t think so. It’s too much a part of the world now and we’ll just have to live with the consequences.

William Powell And 'The Anarchist Cookbook': A Defense

So guy creates a handbook for terrorist acts and then decades laters renounces it when he has no power to do anything and doesn't even own the rights anymore.

Perhaps we need to be more careful with the things we create in our youth as they grow out of our hands and infect the world.

I always thought of it as a book for pranks. Yeah there's bomb recipes but most of the book is about how to get high off of banana peels or create a giant smoke bomb (bleach and dry ice).

Moderator
Utah from Fort Worth, TX is reading Lonesome Dove by Larry McMurtry December 18, 2013 - 9:50am

As has been said already on Amazon (Anarchist's Cookbook comments section):  you can get much better and more dangerous information from the US military's improvised munitions handbook, also available for free on the interwebz.  Getting emotionally involved with The AC is really much ado about nothing.

I don't see the point in banning the book with the easy access of the internet. There is an internet version with a different title online anyway.

This book changed my life.

It won't make a difference to every prospective reader, but his opinion is significant. There are people who wouldn't care, but there are surely some people on the fence, still making up their minds as to how they wish to view the world, and the author's statements might yet be influential to some of them. His opinion is not irrelevant though it might be irrelevant to you.

OtterMan from New Jersey, near Philadelphia USA is reading Ringworlds Children December 20, 2013 - 9:28am

I like that you don't seem to take an editorial position one way or the other, but there at the end just a click away for only $22.93... The reader can make up his or her own mind.