Author Claims 'Frozen' Stole From Her Life in 18 Ways 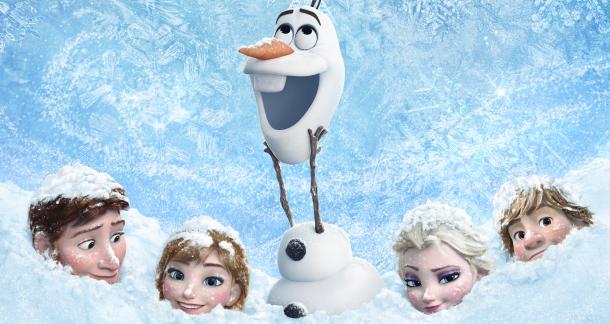 A New Jersey author is claiming that the Disney film Frozen was cribbed from her memoirs.

Just to be clear, a memoir is usually based in reality.

Just to be clear, here's the IMDB description for Frozen:

When a princess with the power to turn things into ice curses her home in infinite winter, her sister, Anna teams up with a mountain man, his playful reindeer, and a snowman to change the weather condition.

Disney has responded, defending themselves by pointing out that they absolutely did not steal from anyone's memoir. They stole the idea from a Hans Christian Anderson story! So there.

However, that explanation isn't good enough for author Isabella Tanikumi, who filed a lawsuit citing 18 themes and situations from Frozen that she believes were pulled from her books Yearnings of the Heart  and Living My Truth, both memoirs.

Who has the time and inclination, in this world of 24-hour news, to go through all 18 of her claims?

1. The Village
Isabella's story begins in her village, which is at the base of a snowy mountain, and sisters are featured. Frozen begins in a similar setting where two sisters live with their parents.

If this lawsuit goes through, you can just bet I'll be suing the writers of Wall-E. Because that movie begins on a garbage planet, which my apartment has been called by unkind visitors.

2. In both instances, two sisters, near-ish in age, appear. They have "opposite" hair colors, and they have horses.

In Frozen, there is one blonde sister, one brunette. I think we all know the opposite of blonde hair is not brunette. It's black. This is completely unsupported by color spectrum analysis and also I think we can all agree it's 100% accurate.

3. The sisters in both cases love each other.

Huh. So I guess, what I'm learning here, is claiming that loving sisters are a strong basis for this lawsuit. Luckily for my memoir, my siblings and I remain at a neutral, yet not un-warm distance.

In Isabella's book, she is injured when she falls face-first in custard(?). In Frozen, one sister accidentally hurts the other's head.

Actually, this is the first thing that makes me interested in Isabella's book. How much custard was there? What happened? I'd hate to have a terrible injury, but it's way worse to have one in Three Stooges style.

5. In both cases, the injured sister doesn't remember the injury.

Which is a bit curious in Isabella's case as she claims she doesn't remember the incident, yet she wrote the book about it.

In Frozen, it's a spoiler, so I won't say. But in typical fashion, the kids end up orphaned. In Isabella's life, there is an earthquake that isolates the sisters. She also mentions that a friend died.

7. The younger of the sisters falls in love.

In both cases with a "dark haired tall and fair man." Which, to me, really exposes the bias towards short men. If Isabella's sister had fallen in love with a "snowman-like fellow with curly black hair who really killed it in Book of Mormon" then I'd have stronger feelings.

8. There are two male characters.

In Isabella's life we have Hans and Cristoff pursuing the main character. In Frozen, we have Hans and Kristoff fulfilling the same role. Which is admittedly eerie. I feel like we buried the lead a little here. And as a side note, if you ever Google this pair, be prepared to wade through some thoughtful, though very dirty, slash fiction.

9. Characters in both stories had "healing powers."

Okay, now I'm positive I've got a lawsuit on my hands. I would estimate that my first 40 loves did not return my affection. Sure, it was scary and overwhelming, but come on! The least I can do is get some financial recompense from Disney for my adolescent emotional pain.

11. In both cases, the sister who caused the injury to the other leads the life of a recluse out of guilt.

Alright, there's a small amount of something here, methinks. A sister injures the other, and the one who did the injury goes into a sort of hiding. Although there's a difference in a lot of the exactitudes, this has, at least, potential to mean something.

How come nobody uses a custom thing like that Phantom, the one of the opera? I liked his half mask. It was very on message. "Hey, I'm an opera guy." The Frozen lady definitely should have gone with mittens instead of gloves. Think of all the comedic potential.

13. "Isabella writes about her love under the shadows of the moon...Ana goes for a walk with her romantic suitor under the moonlight."

I mean, I'm sorry. But love under the moonlight? I've been to a wedding. I'm familiar with Van Morrison. Not your strongest point here.

14. Children in both stories run away when they see the main character's "defect."

I think the main function of children in a lot of stories is that they can be cruel and we sort of forgive it. I have an idea for a new campaign. Hey Kids, Quit Being Jerks.

Sadly, I couldn't find the cover for Yearnings of the Heart that the suit seems to refer to.

It's getting hard for me to even make fun of this.

17. [spoiler for Frozen. And, I guess Isabella's book too. So we'll skip it, but trust me, this isn't the most exciting similarity]

18. A post Isabella makes on Facebook: "Frio, Frio Frozen?" This is, apparently, in regards to a song.

I bought frozen peas once. Get it? Frozen peas.

You can read all the paperwork, if you'd like.

All kidding aside, there were a few points that were stronger than the others, the things that involved the broader story arc between the sisters being primary amongst them. And when you add in the odd similarity of the male side characters' names, there's certainly the tiniest little nagging something.

Here's what I've learned from this experience: I am going to make a lot of money from Disney when I put out my memoir, featuring myself, my trashed apartment, my siblings about whom I have feelings, the eventual death of our parents, the time I gave my brother a black eye, and the distant, yet adoring relationship I have with Josh Gad.

Blogging and the Law: Five Issues You Need To Know

Writers: Do You Need A Lawyer?

That cover just made my day. Where does Machu Picchu fit into all of this?

I mean, I'm sorry. But love under the moonlight? I've been to a wedding. I'm familiar with Van Morrison. Not your strongest point here.

And oh dear GOD you've got both LitReactor Leahs commenting on the same piece! Watch out! We may create a wormhole!

Really, that's some superficial similarities. I'd understand if they copied whole characters and plot lines. But do you know how many JRPGs start with like the hero's village being burned down? (Well OK only one I've played - Final Fantasy 7.)

Now the fact that Disney does feel like adapting every novel under the sun, rather than say *gasp create their own content isn't exactly doing them any favors. Which wouldn't be an issue if they didn't like sugar coat everything.

Just to play both sides of the coin.

Leah R-- it's like having two Starbucks locations facing each other on the same street. Must be the end of the universe.

Community Manager
helpfulsnowman from Colorado is reading But What If We're Wrong? by Chuck Klosterman October 21, 2014 - 6:53pm

Haha, I'm so happy to provide a good laugh. Even at the expense of collapsing the universe.