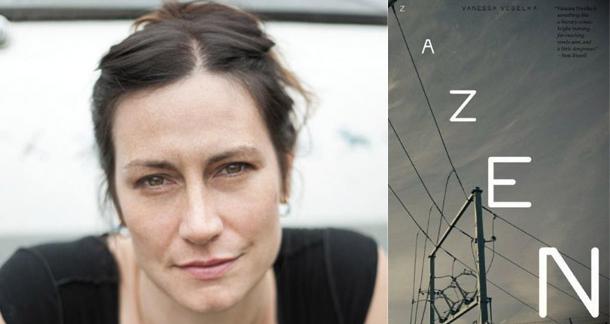 Vanessa Veselka, author of Zazen and instructor of our Leading With Voice class, was yesterday named the winner of the PEN/Robert W. Bingham Prize.

The prize is awarded to a "fiction writer whose debut work, published in 2011, represents distinguished literary achievement and suggests great promise." You can see the official release and all the 2012 Pen Awards at this link; 18 were handed out, in total.

Here's a synopsis of Zazen, which is published by Red Lemonade:

Somewhere in Della’s consumptive, industrial wasteland of a city, a bomb goes off. It is not the first, and will not be the last.

Reactions to the attacks are polarized. Police activity intensifies. Della’s revolutionary parents welcome the upheaval but are trapped within their own insular beliefs. Her activist restaurant co-workers, who would rather change their identities than the world around them, resume a shallow rebellion of hair-dye, sex parties, and self-absorption. As those bombs keep inching closer, thudding deep and real between the sounds of katydids fluttering in the still of the city night, the destruction begins to excite her. What begins as terror threats called in to greasy bro-bars across the block boils over into a desperate plot, intoxicating and captivating Della and leaving her little chance for escape.

Zazen unfolds as a search for clarity soured by irresolution and catastrophe, yet made vital by the thin, wild veins of imagination run through each escalating moment, tensing and relaxing, unfurling and ensnaring. Vanessa Veselka renders Della and her world with beautiful, freighting, and phantasmagorically intelligent accuracy, crafting from their shattered constitutions a perversely perfect mirror for our own selves and state.

The PEN award is prestigious and very well-deserved. Zazen is a fantastic novel--I originally bought the eBook and loved it so much I had to track down a paperback.

And, I'm sure I'm speaking on behalf of the entire LitReactor community when I say: Congrats, Vanessa!

Congratulations to Vanessa. This a very big deal and, I'm told, fully deserved. It just goes to show what great tastes the folks at Litreactor have and the talent they attract.

way to go, Vanessa, how awesome is that. congratulations.

here's my glowing review of it at TNB: