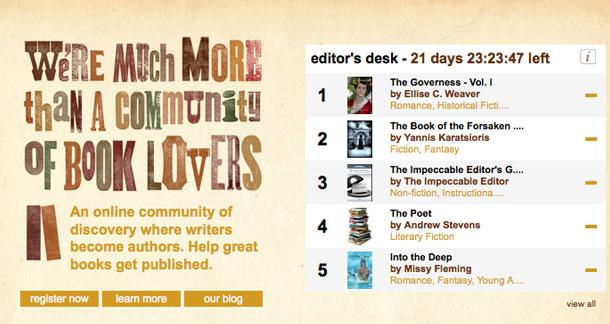 Anyone else get that email from Authonomy.com this morning? Well, here's what they want you to see, clipped right from the site:

My stance on Autonomy is the same as it was three years ago when I first came across it: not my cup of tea. The quid pro quo of 'you give me a good review and I'll return the favor' seemed highly incestuous and shady. My understanding is they've since made some changes to their ranking and voting system to discourage that, but the whole idea of the site being a networking game as opposed to a writing game still doesn't sit right with me. For those readers who are coming in fresh, the site works as follows: you submit your manuscript, and then through a system of ranking and shelving, attempt to get your manuscript into the Top 5. If you do that, then an editor from HarperCollins will read your work, however, there's absolutely no promises of publication beyond that.

That's more or less the main complaint with Authonomy: the ratio to how many people get read by these editors compared to how many get deals is heavily slanted.

Then there's this, which is also taken right from the site:

These books will be hand-picked by Scott and the Authonomy Editorial Board, worked on by HarperCollins’ finest publishing teams, and published as HarperCollins digital originals across all possible devices. The bestselling books will go on to have print editions. Most importantly, all of the titles will have been discovered on the authonomy.com website.

So after all that work these authors are only getting digital versions put out? Yes, granted, they're going to get HarperCollins caliber editing and cover design, but an eReader-only release seems to show little faith in these authors. Let's also not forget that HarperCollins is going to be getting a royalty cut when there are plenty of authors uploading their manuscripts to Amazon on their own.

I have to hand it to Lark and White (the authors): they must be extremely good at marketing themselves to make it into the Top 5, and they must have some talented people working for them considering HarperCollins is going to publish them. But to be offered this digital-only deal seems like a waste when you consider the Amanda Hocking route and how she did everything on her own. Hindsight is 20/20, I know, but with no advance money and no print edition (unless their eVersions sell well), I wonder if Lark and White will kick themselves for not taking their books the traditional route.

Authonomy/HarperCollins needs to start treating their contracted writers like real authors: that means giving them an advance, a print run, and a full marketing push. These writers have already run one gauntlet to get to the editors desk. Why make them run another one?

What do we think LitReactors: does Authonomy need to start offering better deals or would you be happy with this eReader only contract?

I think the whole website needs to be flushed down the toilet.

It was actually the first place I ever went to when I started writing a manuscript, the site offers absolutely nothing. I was sucked in by their grandeur explanations and that fancy word "publish". I used the site for about a month without any feedback on any of my writing. The only thing your inbox will fill with is spambot requests to rate a users book, or somebody with a lot of time to copy & paste previously made messages. The rating system is made up of rate for rate without hardly any reading, and the best at the game sit on the editors desk for weeks and weeks without budging to other authors. Also, did I mention there is typically a countdown for when they actually read books? That's right even if you spam your best and end up at the top it only matters if you are on the list when the clock reaches zero.

If you have any respect for yourself or your writing you will avoid authonomy, especially if you don't have any copy rights to your manuscript. I found chapters of stuff I had written and put only on Authonomy on foreign websites acting as if they wrote it, and I'm not even that great of a writer. Avoid authonomy at all costs.

Yeah, I tried Authonomy...twice. Once about a year ago and then recently, because occasionally I like to remind myself what working at Walmart felt like. (They made us sing every morning and do a "team cheer" then hug each other before we started our shift. If you didn't do it, you didn't sit in the break room with the cool kids and they made you work in returns.) Authonomy is nothing more than a popularity game and a bunch of bullshit (IMO) that has nothing to do with writing. I read manuscripts on there that were kickass and those writers advanced nowhere. Why? They didn't play the game. My last venture into Authonomy ended when a book of bible quotes, I'm talking ENTIRELY quotes taken from the bible, made it to the top five and the editor's desk. WTF is that about?

I'm with Laurance. Avoid Authonomy. Even if they did offer something more as you suggest, Brandon, it's not worth the hoops you have to jump through or the shit you've gotta eat just to get it. I can get as far with the old query and submission process...or just publish with Amazon and spam the crap out of my Tweeps. I'd probably do better with the latter.

I've never used Authonomy so I don't know the process exactly, but assuming that if you were able to "play the [bullshit] game" they seem to have going there, and assuming you were successful in being selected for digital publication, would that not be a solid indication that you have something a publisher is [going to be] interested in?  What's to stop someone from opting to not sign the contract they're offered and taking their work to a publisher and chasing a "real" book deal instead?

I suppose that with the system Authonomy is running (as described by Laurance), it's so exhausting that these two were probably just happy to see a result at the end of it all, rather than take the gamble of chasing something more.  Still, if I were in their position, I think I'd roll the dice and take that gamble...

I joined out of curiosity, had a look around and fled, the way you run from one of those seminars where you turn up thinking you've won something and slowly realise the Head Vampire won't let you leave until you've signed over your entire blood supply in return for a timeshare in a Spanish public convenience.

But even then I wasn't safe. Next the spam e-mails started, inviting me to give CreateSpace lots of money so I could self publish. The threat was never explicit, but it was there. Remember - HC is part of the Murdoch Empire. Annoy Rupert and the next thing you find is your intimate emails printed on the front page of the News of the World...

So I added them to my blocked senders list, draped my monitor in garlic and prayed I would never see that logo again...until now....nooo...nooooooo!