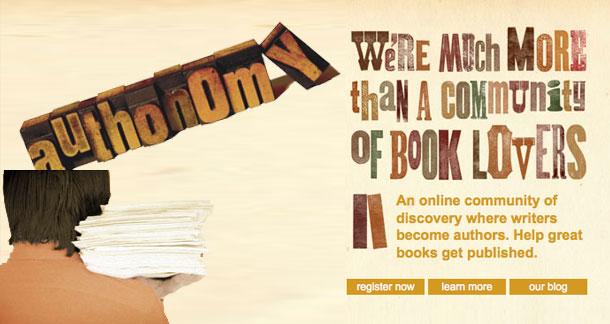 Once upon a time, back when a group of us writers from The Cult were still looking for agents and publishers, we happened to come across a promising website that went by the handle of authonomy.  To break this down into simple terms: it was part forum, and part talent scout.  Essentially, you, the writer, would upload your manuscript, and based on the “backing system,” if your piece made it to the top 5, a HarperCollins editor would give your piece a serious look.

It really didn’t take us long to figure out that the site was less about the quality of writing and more about networking.  Actually, it was a cesspool of networking.  Lousy manuscripts were getting backed on a squid pro quo kind of basis: “I’ll back you if you back me.”  The same lines of general praise were tossed around: “It’s a real page-turner!” and “What a wonderful read!”  Sock puppets loomed around every corner, people making fake accounts to praise their own manuscripts so they could move up in the rankings.

The authonomy project was supposed to be about finding talent and getting them published.  They’ve failed rather miserably on both counts, and needless to say, we went back to The Cult and shook our heads in shame.  That was more than a year ago, and while myself and others signed book deals, published stories, and signed with literary agents, authonomy kept at it with this system.  Now, it seems like they’re attempting to turn over a new leaf.

As some of you may have noticed, new faces have been popping up behind the virtual authonomy gates. Last month we announced that Scott Pack, Publisher at The Friday Project, had been appointed the new head of authonomy.com; Scott stepped onboard with this primary objective: to ensure that more of the great books on the site get published.

TODAY, WE'RE THRILLED TO ANNOUNCE THAT AS PART OF THIS INITIATIVE, SCOTT WILL BE LAUNCHING A DIGITAL PUBLISHING PROGRAMME DEDICATED TO AUTHONOMY'S BEST AUTHORS!

The books will be hand-picked by the Scott and the authonomy Editorial Board, worked on by HarperCollins' finest publishing teams, and published as HarperCollins digital originals across all possible devices. This new HarperCollins list will look to publish one book a month, starting in January 2012. Most importantly, all of the titles will have been discovered on the authonomy.com website and will be published digital originals. The bestselling titles will go on to have print editions.

Preparations for this new list are well underway. In fact, we've already found our first book: Mary Vensel White's The Qualities of Wood. Mary's beautifully written novel tells the story of a young married couple who decide to take a break from city life to renovate his late grandmother's country home, only to become enmeshed in the mysterious death of a young girl. Thanks to the overwhelming support of YOU, the authonomy community, Mary's novel reached the editor's desk this February. You loved its well-crafted prose and vivid characters. Well, so did we!

Wow, a book deal for a digital release?  That would be incredible if it wasn’t already something literally thousands of people are doing through Amazon.  Oh, and if you think for a second that Ms. White’s royalty cut is going to be bigger with HarperCollins than a self-pub through Amazon, think again.

Granted, these books will have a professional edit, artwork, and probably a halfway decent marketing push, but the line “The bestselling titles will go on to have print editions” comes off a bit shady.  The HarperCollins/authonomy people are nearly gushing about this book, but they don’t have the confidence in it to release it in print?

Seems like sparkling cider when you thought you were getting champagne.

Obviously, I had my own experience with authonomy, and my one positive thing to say is that it’s a crash course in whoring your writing out and networking.  Other than that, the site really has survived on feeding the hopes of struggling writers, first with the editor’s desk and now a not-very-good publishing contract.  It’s still early on, but this sounds like another gimmick on authonomy’s part to boost traffic and rope in a few more suckers.

I've never heard of this forum before and it does seem very, very shady. However, I do like the idea of a major publishing house embracing an original e-book line to develop new authors with

Hmmm...I've never heard of authonomy, but it does sound almost too good to be true.  It seems like a good idea in theory, but I can see where lots of things could go wrong.

We talked about this in the very first LitReactor thread. Haha.

Joshua Chaplinsky from New York is reading a lot more during the quarantine October 13, 2011 - 8:38pm

Yeah, saw some autho-bashing in the forums.