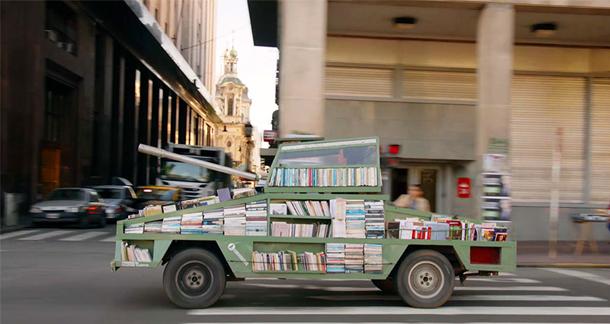 Image by Dovas via BoredPanda

What’s better than a library? One that moves, of course! An artist based in Buenos Aires, Agentina, Raul Lemesoff, has built a “Weapon of Mass Instruction” (Arma de Instruccion Masiva) that carries around a free library for the benefit of passersby.

The tank-style vehicle, originally fashioned from a 1979 Ford Falcon, even has a swiveling turret and faux gun. Lemesoff’s creation features shelf space for about 900 books, stored both on the inside and outside of the tank. According to Bored Panda, the artist hopes to use the project to “battle ignorance and spread knowledge.”

Lemesoff’s mission while navigating the vehicle appears to be one of good will. Along his journey he delivers books to those nearby, with the only stipulation being that the new owner of each novel must promise to read what they’ve taken from the tank. Though his primary target is youths, he donates to all ages.

The unique project has been documented in a video by 7Up. The short documentary shows the artist in the act, driving through the streets of Buenos Aires and handing out novels to anyone who stops to stare.

“Humanity has perpetrated knowledge and books. I think that they should get around more,” Lemesoff says in the film. He also adds near the end, “I don’t do it for money. I don’t do it for fame. I just do this because I have fun doing it.”

Hopefully the artistic endeavor will inspire people to read more! What do you think of this unique mobile library?