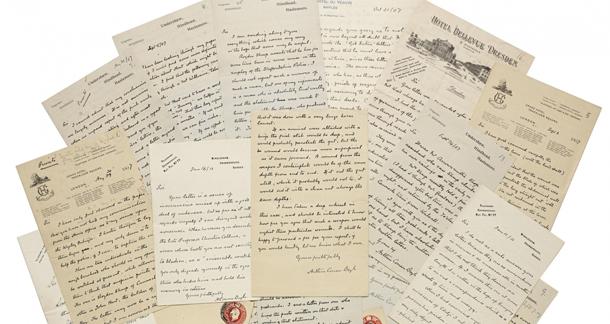 Today we know Sir Arthur Conan Doyle to be the author famous for penning the tales of Sherlock Holmes. Rewind to the 20th century, though, where new evidence suggests he was also a sleuth—and a thorn in the side of police, as well! According to The Guardian, a set of documents up for auction reveals a plot by the Staffordshire police to discredit Arthur Conan Doyle’s investigation into the George Edaljii case.

Edaljii, a Birmingham solicitor, was brought up on charges of horse mutilation and sending poison-pen letters. He was sentenced to seven years of hard labor in 1903, and after his release begged Arthur Conan Doyle for help to prove his innocence. Doyle not only believed the man, but insisted his conviction was a result of racial discrimination.

The author took to writing GA Anson, chief constable of Staffordshire police, constantly, using the letters to posit alternative theories, suspects, and new forensic evidence. Doyle also spoke out publicly on the topic of the case.

Those who have read the letters claim that as one follows them, a breakdown in the relationship between Doyle and Anson is apparent. At one point Anson goes so far as to imply Doyle is an amateur detective. This could be the reasoning behind Anson’s choice to deceive the author with a false letter signed by “A Nark, London.”

A report discovered amongst a collection of letters from Doyle details the attempts made by the chief constable to thwart Doyle. Anson’s efforts included fabricating letters signed with the false identity and establishing fake informers to make Doyle think the letter had been sent by someone else. The letters were probably intended to mislead Arthur Conan Doyle as he searched for the truth.

After the false letter was sent, Anson made a note that said: “There is a vein of humor running through it which I fear was quite lost on the somewhat obtuse recipient.” According to an expert, though, Doyle’s suspicions did grow. In one of his return letters to Anson he even replied that, “There is nothing wonderful in this … it in no way destroys my case, as you appear to imagine.”

What do you think of the constable’s attempt to outthink the creator of Sherlock Holmes—a character who is arguably one of the greatest detectives in literature?