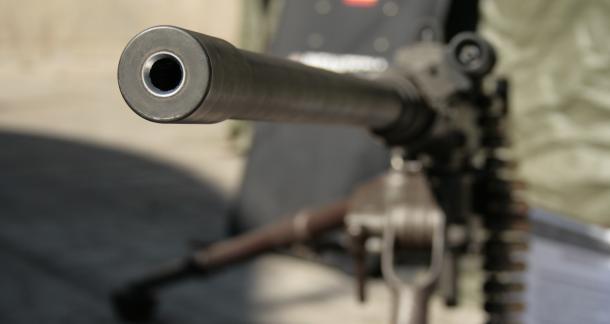 Here's a weird one:

Kurt Busch, a NASCAR driver with a pretty intense history of incidents on the track, appeared in court on Tuesday. His ex-girlfriend, Patricia Driscoll, was filing for a protective order against Busch, and in the proceedings Busch made some pretty interesting claims against Driscoll.

For example: he claimed that she was a trained assassin who once dressed in camouflage, left a hotel room they were sharing, and returned in an evening gown, covered in blood.

He also claimed that she once told him a character in Zero Dark Thirty was inspired by her and another woman, and that various missions took her across South America and Africa.

Driscoll's defense: All of these events occurred in a screenplay she's been working on for the past several years, a script for which Busch provided some notes.

I just want to pause the story for a moment and point out that there is a movie script floating around that was written by someone accused of being an assassin, and then said script was edited by a NASCAR guy.

Where it gets even weirder, Busch's attorney is claiming that these events are indeed from a screenplay, and that it only makes sense as the screenplay's events are based on Driscoll's real life.

Michael Doncheff, a personal assistant to the former couple, took the stand and reportedly said, "...an ailing Driscoll told him in September that she had been picked up by a big man and slammed to the ground while helping round up immigrants at the Mexican border." He also quoted her as saying:

I take down foreign governments. I own Washington.

For whatever reason, Driscoll never tore down these accusations in court. Which could be because she's actually an assassin, or possibly because she's not in the habit of addressing insane claims.

The court case came up after an incident between Driscoll and Busch in his motor home.

Driscoll's claim: Busch slammed her head against the wall.

Busch's claim: He held Driscoll's face in his hands, and her head "tapped the wall" when he did that.