Arrest Us! The Final Stretch 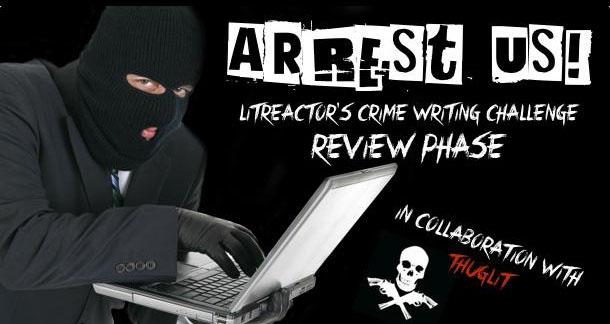 And just like that, we're approaching the end of our crime writing event, Arrest Us! We had a completely unexpected flood of entries at the last second, teaching us here that apparently when given a deadline, writers procrastinate. I had no idea!

We ended up with more entries this year than in either of our previous contests, though I expect next years contest, Fondle Us!*, will get even more.

*Okay, so I haven't exactly confirmed this yet, but I've been bribing the higher-ups with gum and Chuck-E-Cheese tokens for a month now. They'll break soon, I'm sure.

So what should I be doing with my oodles of free time?

You guys have been doing a pretty good job with the reading and rating bit, so I really don't have much to offer here. Just keep on doing what you guys are doing. I've seen some pretty excellent feedback, especially for the stories that are struggling in some areas, which is awesome. Remember that we have some experienced writers here, as well as complete newbies testing their craft in the public arena for the first time, so every piece of advice is going to build a stronger writer.

I also want to say that I appreciate how well everyone has been taking the constructive criticism. You don't have to agree with the advice that you're given in order to appreciate it, and I love seeing how every review response has been ended with an understood bro-hug at the end. You can get berated by snobbish writers anywhere, but I've been saying that LitReactor is a safe place for writers to get feedback without getting their faces caved in at the same time, and you guys didn't make me look like an idiot. So thank you for that.

These Stories Need a Few Readers

As of the time this article is being written, there are nine stories with too few readers to make an accurate rating. Some of them have a zero percent rating with only one reviewer. As has been brought up before, some of these posters have not spent time reviewing other stories, and people don't want to spend time reviewing stories when they may not get anything back for it.

I suppose that's a fair sentiment, but I also think that there are a lot of reasons someone might not be reviewing, such as an apprehension as a first-time writer in judging the work of more experienced members. It's your choice what and how you review, but I'd love to see all stories with enough reviews for the author to take away some valuable advice. We have two weeks left, which is more than enough time to add even one of those stories to your reading list. Remember that there are prizes going out to our best reviewers!

I have seen more than one comment on stories where they will say, "I was going to review this, but it had a serial killer in it, and so I stopped."

On the one hand, we understand if you don't want to spend time reading a story that won't be eligible for the prizes, because that takes time away from eligible stories getting reviews. However, at this point in the contest, most of our stories have enough reviews to get some good feedback, so you can feel comfortable leaving quality reviews for stories even if you doubt they meet contest criteria. They may not win any prizes, but I'm sure these authors would still appreciate a critique if you can spare the time. The Thuglit publishers will make the final decision as to whether or not a story will be eligible for publication in their magazine.

Many writers who have been struggling to get attention for their stories have found some success by posting their links in this thread. Even better, I've seen people recommending other writers' stories, which is really in the spirit of community I've been hoping to foster. Also, don't forget that one of the surest ways to get readers is to leave reviews. Most members will pay back everyone who reviews their stories with more reviews.

Hey guys, this ends in two weeks. Once the clock strikes midnight and July 31st turns to August 1st CST, then the reading period is over. At that point, the high judges will don their wizard robes and begin the process of deciding our winners. We'll detail how all that will work as we approach the final deadline.

Keep reading, and good luck to everyone. See you in two weeks.

I would have participated, but my stuff when I was doing that sort of thing fell more into the future noir type of area. Still breaking out of that with 19th century fantasy for picture books sort of rut I'm in at the moment.

I look forward to seeing you guys work in the anthology.

If future noir is your thing, you may like The Quiet Detective. I've been plugging this one all contest, because... well... I'm jealous, to be brutally honest.

I'll check it out.^^ I do like quiet detectives.

I've been sneaking around the story boards and giving stealth ratings. Unfortunately, no solid time to critique, but folks are really kicking ass out there.