Arrest Us: Meet The Publishers Donating Grab Bags Of Books 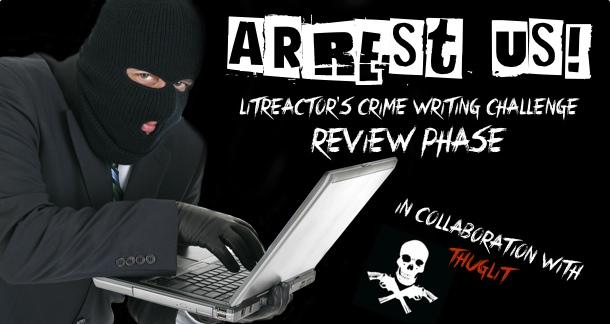 The review period for Arrest Us!, our crime fiction writing challenge, is chugging along. We've got 154 stories for your reading pleasure, and you've got until July 31 to wade in, read some stuff, and leave some comments.

Why do it? Because these public challenges are a way of pushing people out of their wheelhouse, into new and creative directions. And it's not just about writing—it's about improving as writers. And getting insight from readers—no matter their genre, no matter their worldview—is incredibly valuable. This is a great learning experience for everyone involved.

Plus, you know, prizes.

First up is Mulholland Books, named after the winding stretch of road that follows the ridgeline of the Hollywood Hills. It's an imprint of Little, Brown and Company, which is a division of Hachette Book Group. And they've been stomping some serious terra lately, releasing S. by J.J. Abrams and Doug Dorst, as well as putting out the American editions of the Robert Galbraith (a.k.a J.K. Rowling) books. They also publish LitReactor instructor Duane Swierczynski, along with a whole lot of exciting contemporary crime authors.

Next up is Hard Case Crime, founded by Charles Ardai, one of our celebrity critiquers. It publishes a slew of classic and contemporary authors, emulating the style of pulp paperback novels from the 40s and 50s. In the past few years they've put out some incredibly exciting books, from the final, lost James M. Cain novel, The Cocktail Waitress, to Joyland by Stephen King, for which they bucked common publishing practice and only released a print version.

Broken River Books is the youngest publisher on this list—an indie promising challenging, dark fiction, headed up by J. David Osborne. They've been making some serious noise out of the gate, starting off with a Kickstarter campaign that—as opposed to most Kickstarters—actually delivered. They kicked off with five titles, including Peckerwood by Jedidiah Ayres and The Least of My Scars by Stephen Graham Jones. Osborne has followed that up with a solid line of books, and has recently teased that he'll be accepting novella and short story submissions.

Finally, there's MysteriousPress.com. Spoiler alert: I'm the associate publisher. Which made it a little easier to get approval on giving away books. It's a partnership with Open Road Integrated Media, spun off from Otto Penzler's storied Mysterious Press. Our specialty is re-releasing back lists of acclaimed crime and mystery authors in digital formats. But we also do new fiction—mostly recently A Swollen Red Sun by Matthew McBride, and the upcoming The Big Hit by James Neal Harvey—as well as select re-issues, like They Don't Dance Much, a classic rural noir by James Ross. For those, and for some of our back list titles, we do a paperback release.

What'll show up in the grab bags? Who knows. Maybe if you get in there and get reading, you'll find out...

What are you waiting for? Go read and rate some stories!