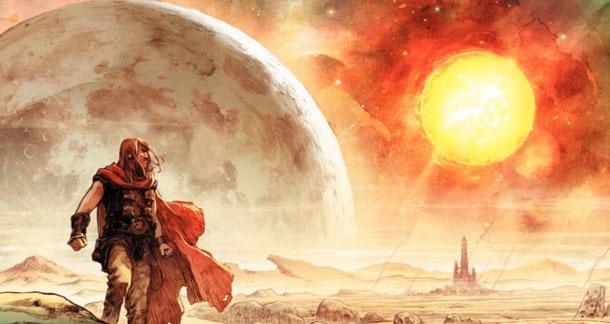 Earlier this year, it was announced that Darren Aronofsky would be releasing a comic book version of his epic Noah script to help generate interest in the pricey project. After all, the tactic worked when Brad Pitt bailed on The Fountain and the director needed to raise the bloated corpse of that film from the dead. But now that Paramount has committed to footing the 150 million dollar bill, is this unorthodox type of interest generating still necessary? Probably not. Do we still want to read the thing? Yes, please.

Well, unless you speak French, that's too durn bad. Volume one of the Noah graphic novel has been released in France only, giving the rest of the world yet another reason to dislike the French. Will the book ever make its way to our majestic purple mountains and fruited plains? Only time will tell. Until then, enjoy this poorly translated synopsis:

It was a world without hope, a world with no rain and no crops, dominated by warlords and their barbarian hordes. In this cruel world, Noah was a good man. Seasoned fighter, mage and healer but he only wanted peace for him and his family. Yet every night, Noah was beset by visions of an endless flood, symbolizing the destruction of all life. Gradually he began to understand the message sent him by the Creator. He had decided to punish the men and kill them until the last. But he gave Noah a last chance to preserve life on Earth …

If you polly vous francais, or just want to look at the perty pictures, you can check out this gallery from publisher Le Lombard. I got news for you- this ain't your grandma's biblical epic. The original author of the Noah story, God, could not be reached for comment.

Screw the French! (Not really, I love those froggy misanthropes) I have to say I liked the graphic novel of the Fountain more than I did the film (Although I liked the film for its visuals) and I'd love to see this book hit American shores before the release of the film.

That sounds pretty cool just on its style and genre choices alone.  Aronofsky's Black Swan was one of the most astonishing experiences I've ever had in the cinema, so I can only imagine what he'd do with material like this.

Joshua Chaplinsky from New York is reading a lot more during the quarantine October 21, 2011 - 12:04pm

I'm a big fan of the man and have liked everything he's done. I feel like I'm in the minority when I say I really liked The Fountain.

I'm with you on that one, Josh. Yeah, there are areas that I think it could have been better but I really like that movie as it is.

The Fountain was great along with his other movies. And I love all their soundtracks.

Thanks for the news. I'm a huge Aronofsky fan. And I do a lot of my writing to his soundtracks (especially The Fountain, I can write for hours with that soundtrack playing on a loop).

I love writing to Clint Mansell's work. I've been listening to a lot of the stuff from Pi, especially a piece called "We Got the Gun". I listened to Inception's soundtrack for a while too.

Joshua Chaplinsky from New York is reading a lot more during the quarantine October 21, 2011 - 8:37pm

I believe Clint also did the Moon soundtrack, which was good.

Ah yes, Moon!! such a great film. I listen to the "Welcome to Lunar Industries" song a lot. And Rockwell blows me away with his acting.

Joshua Chaplinsky from New York is reading a lot more during the quarantine October 22, 2011 - 9:47pm

Sometimes I confuse him with Cliff Martinez- he was the first drummer for the Red Hot Chili Peppers and has scored practically every Steven Soderbergh movie and, more recently, Nicolas Refn's Drive- because they have the same initials and kinda have a similar sound.