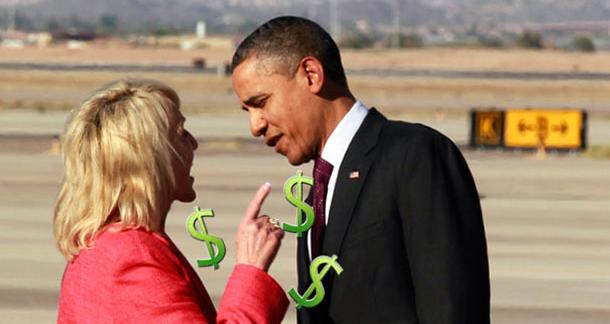 My new marketing plan for when I sell my book is to yell at the president.

It worked for Arizona Governor Jan Brewer. After getting into a heated discussion with President Obama on a tarmac in Phoenix on Wednesday, the book shot up in the Amazon sales rankings, from 285,568 to 21.

Obama, apparently, was not thrilled with his portrayal in her book, Scorpions for Breakfast: My Fight Against Special Interests, Liberal Media, and Cynical Politicos to Secure America's Border.

Brewer, a Republican, describes the president as "condescending" during a meeting at the White House to discuss Arizona SB 1070, the Support Our Law Enforcement and Safe Neighborhoods Act. That's the law that allows law enforcement to stop any person at any time and demand identification to determine their immigration status.

The White House is saying the meeting described in the book was "cordial."

What fight? It looks like they are about to kiss.

He should slap her!