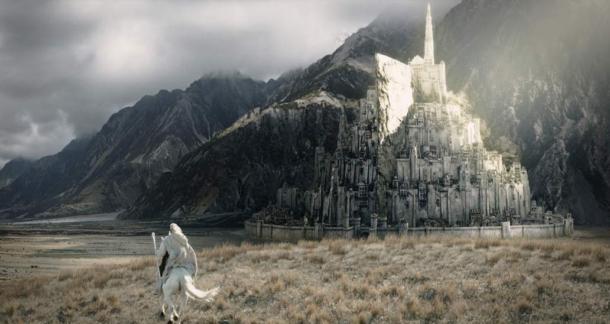 A group of architects, headed by Jonathan Wilson, is crowdfunding to make Tolkien's Minas Tirith (à la Peter Jackson) a reality. According to the Indiegogo page, the project hopes to create a fully functional city in southern England capable of supporting residences and businesses, in addition to a substantial tourist population.

The cost? A mere £ 1.85 billion. However, whatever is left over after the city is (hopefully) finished in 2023 will go towards maintenance and public services until 2053. Some of the perks of donating include getting your name on the city monument (£15), a night at Minas Tirith in one of the proposed 300 lodgings (£500), and a Lordship/Ladyship of MInas Tirith, complete with exclusive access to the city, horse-drawn carriage transportation, and a seat on the city's Executive Committee (£100,000).

We all share a love of Tolkien's work, and a desire to challenge the common perception of community and architecture. We believe that, in realising Minas Tirith, we can create not only the most remarkable tourist attraction on the planet, but also a wonderfully unique place to live and work.

While this campaign seems like a pipe dream, I will totally visit Minas Tirith if it succeeds. What do you think? Will you be donating? Would you live in Middle Earth if you could? Who wants to get Rivendell up and running with me? What other literary locations would you like to see built?