'Archie Meets Ramones' Coming To A Comic Shop Near You 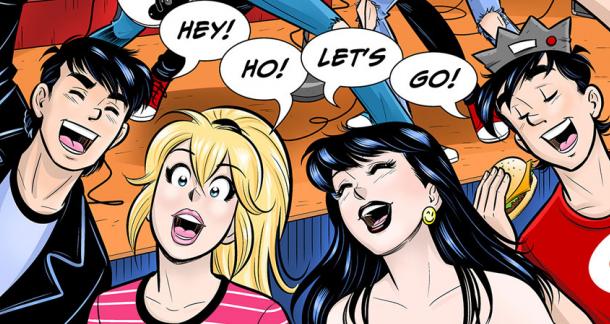 Fans of Archie Comics and seminal punk band The Ramones have something pretty awesome to look forward to. From GalleyCat writer Maryann Yin:

Archie Andrews and his friends are about to get hit with a 'Blitzkrieg Bop.' Archie Comics has announced a new crossover comic called Archie Meets Ramones.

...According to the press release, the publication date will coincide 'with the 75th anniversary of Archie Comics and The Ramones' 40th Anniversary.

The special series is set to hit stores sometime in 2016, though no specifc date was announced. Alex Segura, who penned the previous crossover 'Archie Meets Kiss,' will co-write 'Ramones' with Matthew Rosenberg, known for 'Twelve Reasons To Die,' a collaboration between RZA and Ghostface Killah. Art will be handled by Archie mainstay Giselle. You can read the press release in its entirety over at Newsrama.

Given that both The Ramones and Archie Comics deliver healthy doses of subversion under a comical veneer, this mash-up feels like a match made in heaven. What do you think?

Thank you for making me feel youthful again.