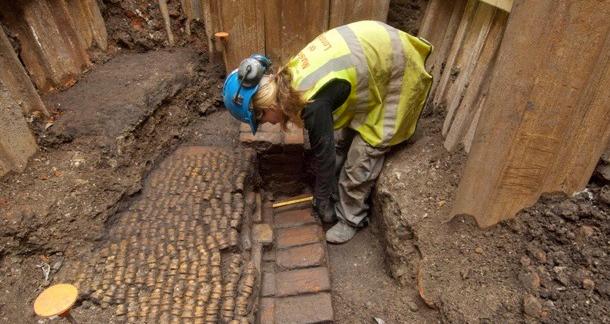 This weekend I lost my keys but was positive they were in the kitchen last time I had them, so I kept wandering in there, looking under the loaf of bread and staring suspiciously at the bananas. I felt less stupid about the whole thing after I read that Britain does the same thing with historically significant Elizabethan theatres. Like, they're pretty sure they last saw it around 1622 somewhere near Hewett Street in Shoreditch, but they can't quite say for sure. So they put up a historical marker east of London's business district just to inform tourists that it's probably, you know, around here someplace.

So imagine their surprise when the Museum of London Archaeology (MOLA) was surveying a future construction site just a few hundred yards from that historical marker and hit upon the remains of the Curtain Theatre behind a pub. The Curtain, opened in 1577, was home to Shakespeare's company, the Lord Chamberlain's Men, from 1597 until the Globe opened in 1599. It is believed to be where works such as Romeo and Juliet and Henry V were first performed. The outer walls that have been uncovered lead archaeologists to believe the Curtain may be Britain's best preserved Elizabethan theatre.

It's just 200 yards away from the creatively named The Theatre, another venue that housed the debut performances of some of the Bard's early works. The Theatre (uncovered in 2008) and the Curtain Theatre are thought to be the first purpose-built theatres in London. The proximity of the two incredible finds would lead any U.S. developer to fence the whole area in, hire some roving mascots, and open gift shops selling "winter of our discontent" snow globes, "to thine own self be true" hand mirrors, and "rose by any other name" light-up flowers. And that is why we can't have nice things.

Fortunately, London has other plans. Several redevelopment proposals will be publicly displayed at the site this week, and the owners, Plough Yard Developments, plan to incorporate the remains as public space and hope to stage plays there in the future. A spokesperson said, "This is one of the most significant Shakespearean discoveries of recent years. ... The quality of the remains found is remarkable and we are looking forward to working with MOLA, local community and Shakespearean experts to develop plans that will give the public access to the theatre remains as part of a new development."

Photo via Museum of London Archaeology