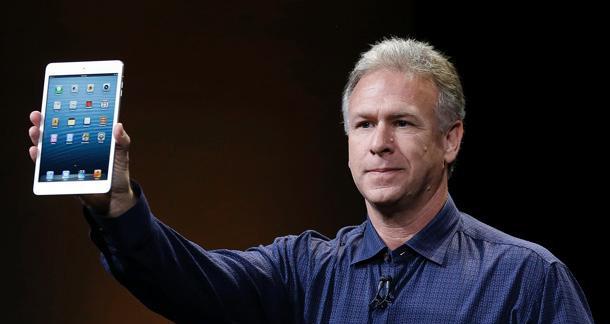 There's been buzz for weeks that Apple was on the verge of releasing a scaled-down version of the iPad, and they came through yesterday, introducing the iPad Mini. It was clearly a response to smaller, souped-up tablets like the Kindle Fire and the Nexus 7.

But tech writers were immediately thrown by the price—the 16GB wi-fi Mini costs $330, which is $130 more than the equivalent Kindle Fire HD. The Fire is a bit smaller and doesn't have the same abundance of apps, but it's got better resolution and a slightly stronger processor.

Here's a chart from Apple, comparing the prices of its iPad lineup

Gizmodo makes a compelling argument for how this is a head-scratching move from Apple. They note that the original iPad was the cheapest tablet on the market when it was released, and the MacBook Air lowered the bar on pricing for ultrabooks. Gizmodo goes on to say:

Charging so much more for a product that's not clearly so much better is a major step backwards for Apple, especially given its unfamiliar position in the small tablet space as a follower. You don't enter an established market—Amazon's in its second generation of Kindle Fires already, and has millions of loyal customers at its disposal—by asking people to assume your offering is nearly two times better than what they already know to be great.

It'll be interesting to see if people accept the iPad Mini like the did the original iPad. For months leading up to the debut of the iPad people were saying it was a device no one would buy or find use for, and in a little over two years Apple sold a hundred million of them. The iPad Mini sure looks nice, but that price is no joke.

Apple also announced a new version of iBooks, which boasts an option to scroll through a book to read, instead of flipping pages. There's also a new version of iBooks Author out which, according to Galleycat, will "let publishers embed their own fonts in a digital book, use multi-touch widgets to make more complex books and create more complex mathematical equations in books."

So, what do you think about the Mini? You can't say Apple doesn't make pretty products, but that seems like a steep premium for the device. Are you enticed by the size?

Comparing it to the Kindle Fire HD, the iPad Mini is considerably more diverse, and seems much more sturdy. The Fire is plasticky, iPad Mini is metal. I would have bought one if they hit the right price point. The 16gb Wifi version is $330 (£205 equiv.) in the US, but £269 in the UK. That's £110 more than a Kindle Fire HD, and £140 more than the standard Fire. If they had set the UK price at under £200 I would have bought one (and looking at the US price they could have!) but I'm not paying £110 more than the rival for a better made, more solid product. Especially as it would probably never leave my house.

its a nice toy, but both me and the missus have iPhones (I'm writing this on mine, for example) and so already have web, apps, iBooks, etc. at our fingertips, so it's kind if pointless in that respect. I'm not a great tablet reader. I like books. I like collecting them. If it was more competitively priced I'd have thought about it. But it's not. So I'm not.

I am for it. I don't have a regular iPad (in large part due to price), but have held off on getting a Kindle because I like being able to read from any platform on my iPhone. This price point IS enticing to me because I have a number of Apple products and seamsless integration makes life easier for me, and because I'll be able to buy books from Kindle, Nook, iBooks, etc without any extra work.

I'm going to wait and see how Microsoft's Surface shakes things up, then think about whose device is the best buy. Frankly, I think the Kindle Fire is nifty but very limited--it's too small, I'd argue, to have a great touchpad "keyboard." Whereas devices like the iPad and, presumably, the Surface are compatible with third-party wireless keyboards, for those of us who might prefer the versatility and comfort of a laptop's keyboard in conjunction with the ease and portability of a tablet. Call me old-fashioned, I guess.

There's no comparison to the Kindle and Nook pads; they're made by bookstores, not a computer company. We have both e-readers in our house. We prefer the ipad, hands down. I do admit it is a *little* big to carry around everywhere (I got the Timbuk2 bag made for it to do so), and since getting our iPhones, for the most part we use it to read books, the paper, and look up shit on IMDB while we watch TV. To that end it also functions as a universal remote. T regularly  takes it with him to take notes at school with the bluetooth keyboard if he wants a lighter load. It's linked via Time Machine and iCloud to all our other devices so we can share contacts/photos/music, etc. I use Pages and share my writing across all the devices, so I can write and edit with it if I don't want to take my MacBook with me (and try writing 2,000 words on an iPhone. It's not fun.). With the Kindle and Nook apps, plus Overdrive and iBooks I can also share all my books. It's awesome to be able to read on the iPad before bed, get in bed with my iPod, and pick up where I left off on something more manageable to fall asleep with. My iPad's 1st gen, bought after standing in line on day one, and I've never had a problem with it (and I drop stuff a lot).

Your blog provided us with valuable information to work with. Each & every tips of your post are awesome. Thanks a lot for sharing.

Apple is one of the most famous and reliable companies that produced high quality gadgets in this generation. Last year, they surprised us by reaveling the downsized iPad mini and obviously lots of people are very much interested to try this new gadget. And if you are looking for ipad mini protector for your gadget please follow us.