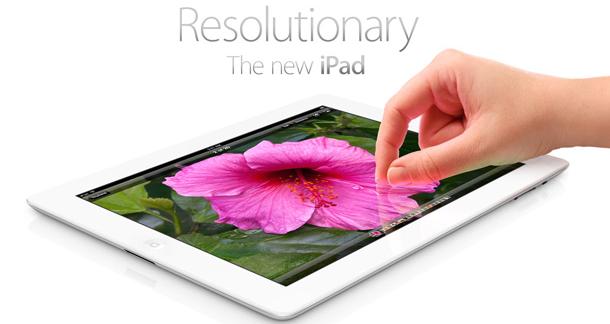 Apple just announced the newest generation of its ultra-popular tablet. Despite speculation it would be called the iPad 3 or iPad HD, it was only referred to as "the new iPad." No fancy names for this model, I guess!

As is always the case, the final product isn't as exciting as the speculation would have led you to believe. No edge-to-edge screen, no 7-inch model, no radical re-design, no elimination of the home button, no flowers and a backrub when you've had a hard day.

Here are the highlights:

It also maintains the current pricing scheme of the iPad 2. Pre-orders start today, with March 16 set as the release date. Apple will continue to produce the iPad 2, and lop $100 off the price of each model.

Those are some heavy-duty improvements, but nothing we didn't see coming (though I am a little surprised they integrated 4G LTE into the iPads before the iPhones). Personally, this isn't enough for me to upgrade from the 2--I'm fine with a wifi-only model and the screen is sharp enough. And I don't take pictures with my iPad. Who even does that? Wake me up when there's an iPad that makes pancakes.

Apple also announced a new Apple TV, and a slew of updated apps (finally iPhoto comes to the iPad). Visit Apple's website for more, or, if you want some good analysis and roundups, check out tech-blog Gizmodo.

So, folks, what do you think? Anyone upgrading from the iPad 2? Does this new model convince anyone to make the iPad plunge? What do you think about it not having a real name?

I was planning to buy an iPad 2 this month, so this is fantastic news for me. I don't need the latest and greatest, I just need a new portable "machine" as it were, since my netbook is dying a terrible death.

I'll need Lasik corrective eye surgery to get the most out the new iPad.

So is this thing going to function better as an eReader than the old models? Or will my eyes still fall out after 20 minutes?

I've had an iPad2 for about a year now and, like you, I'm fine with it.  I see no need to upgrade.  Incidentally, I'm the guy who takes pictures with his iPad.  My digital camera shit the bed around the time I got the iPad, so I just started using the iPad to take pictures.  Yeah, it's a little awkward, but it gets the job done.  I'm just too lazy to go out and get a decent digital camera.

I love my iPad 2.  The thing truly is a game-changer.  I use it all the time.  And yeah, Josh, I do a TON of reading on it.  Mainly scripts (in PDF format) and it never hurts my eyes.  I guess you just gotta get used to it.  I don't rely too much on typing on my iPad or sending emails.  I mainly use it to consume media... not produce it.  And while that might not seem like enough of a reason to get one... after owning one for even one day, you suddenly 'get it.'  And then you can't imagine ever not having one.

The features I like best about this new iPad are the 4G LTE, the hotspot, and the dictation.  But it's not enough to get me to upgrade.

And yeah, just saying the words 4G LTE makes me think of this:

Class Director
Rob from New York City is reading at a fast enough pace it would be cumbersome to update this March 7, 2012 - 7:35pm

Christopher, I was just walking through Grand Central and saw a girl taking photos with her iPad. So I was wrong. The new camera does matter!