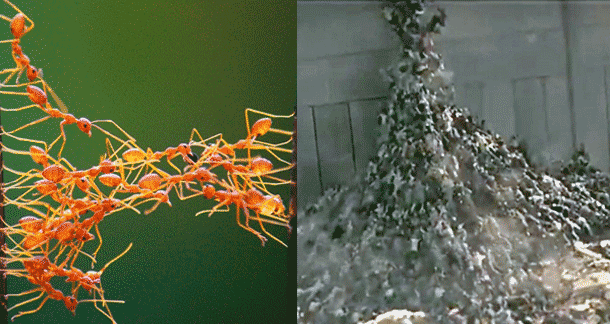 With the release of the new World War Z trailer, the adaptation of Max Brooks’ novel looks pretty good. But as Wired asks, “What’s up with all those swarming zombies?” Being used to the shambling hordes from The Walking Dead and other zombie classics, it’s pretty terrifying watching the fast zombies in the trailer swarming up the side of a building.

Bradley Voytek, a neuroscience Ph.D. who is on the advisory board of the Zombie Research Society, told Wired his theory about fast zombies.

Unlike previous ‘fast zombie’ flicks like 28 Days Later wherein the zombies are basically acting independently of one another, the zombies here are showing what look like intelligent behaviors: clustering, swarming and even coming together to form a ‘zombie ladder.' While people might be tempted to say that the WWZ zombies are therefore somewhat intelligent, I’d argue the zombies here are simply exhibiting emergent behaviors like what we see with ants.

So like ants, which often take on much bigger creatures and cross bodies of water, the zombies are not really thinking for themselves - they’re just blindly following the rest of the horde.

"While these behaviors look very intelligent, they’re really a different kind of intelligence that emerges at a macro scale from micro-scale, or local, interactions,” Voytek said. “It’s like when you see a flock of birds or a school of fish all turning together: there’s not an organizing intelligence directing them all where to go; rather, each individual is tuned in to its nearest neighbors.”

Mimicry, huh? That’s good - I’d rather that than an army of super-fast Zombies plotting to take over the world where we left off. They scare the bejeezus out me - how about you?

That scene about made me run away and hide.

I can't WAIT for this movie to come out!!!

Good explanation, but I'm still not impressed with the CGI or the departure from the book.

I have no problem with the cgi, but the swarming is the mOst interesting part of the movie so far.

Joshua Chaplinsky from New York is reading a lot more during the quarantine November 13, 2012 - 3:39pm

Zombie ladder was def the coolest thing in the trailer. The speed and mass of zombies is scary. The CGI-- not so much.