Another Literary Birthday: 'One Flew Over The Cuckoo's Nest' Is 50, Too 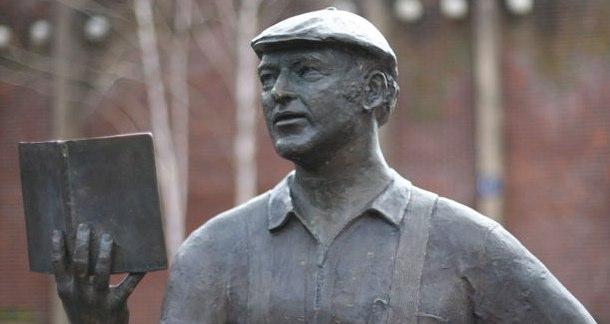 A Wrinkle In Time isn't the only book that's turning 50 this year. Ken Kesey's iconic One Flew Over The Cuckoo's Nest is having a golden anniversary, too. It, however, is not going on a blog tour. It is celebrating quietly in homes and libraries across the country.

Written two years after Kesey worked as an orderly in a mental hospital in California, One Flew Over The Cuckoo's Nest did for the world of in-patient psychiatric care what The Jungle did for food manufacturing. Illuminating, disturbing, and highly fractured in narrative, the experimental prose and perspective (from the point of a mute patient in an asylum), as well as the themes of authority and rebellion were well received in 1962, when such topics began pervading the country.

One Flew Over The Cuckoo's Nest isn't Kesey's best book (I would argue any day that Sometimes A Great Notion takes that prize), but it is his best know--and the one that made the merriest of pranksters more or less of a household name.

It's hard to believe that the book is now 50 years old--possibly because so many people equate it with the 1975 Jack Nicholson film, which Kesey, who passed away in September of 2001 (also difficult to believe), did not approve of--a fact backed up by Chuck Palahnuik's foreward in the 2007 release by Penguin.

Image by Cacophany via Wikimedia Commons

Love that story - Ken Kesey is an inspiration.

Jeff from Florida is reading Another Side of Bob Dylan by Victor Maymudes February 3, 2012 - 9:47am

Buying is ideal if you are starting small and lease if you want a larger set-up. I and lots of my friends use Superfine printing screen printing - they have very nice costumer service and are quick to respond.

It is also very important to stay away from the grocery store or box store products like Zodiac or Hartz. Many of these products can cause severe allergic reactions in animals.

An obligation of appreciation is all together to offer charming information to us. i like your post and all you give to us is uptodate and altogether edifying, i may need to bookmark the page so i can come here again to examine you, as you have made a great appearing.  Texas CPA