Another Bullshit Name-Change In Trailer City 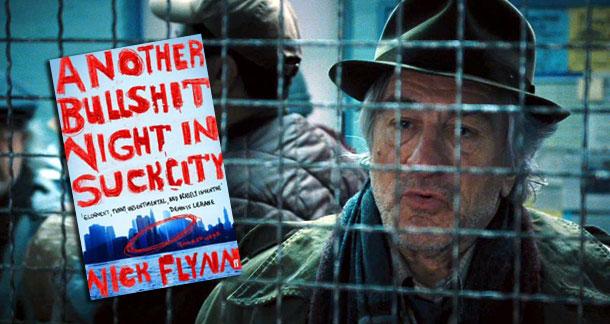 Totally forgot this was coming down the ole movie-pike. Paul Weitz's big screen adaptation of Nick Flynn's acclaimed memoir, Another Bullshit Night In Suck City. That's right, Paul Weitz. Oscar nominated (?) director of American Pie, American Dreamz, and Little Fockers. The guy who played "Sam" in the creeptacular indie, Chuck and Buck. One of the many, many writers on the modern day classic, Nutty Professor II: The Klumps.

Just trying to give you an idea of who's steering this ship.

Now I know what you're saying. "The book is called Another Bullshit Night In Suck City. What the hell is this Being Flynn crap?" Well, since we live in the puritanical candy land know as America, the MPAA have taken a perfectly good eye-catcher of a title and replaced it with the utterly generic Being Flynn. How. Fucking. Boring. You couldn't get more boring if you cast Paul Dano as the lead.

Fine. At least we get an actual dramatic performance from acting heavyweight Rober De Niro. The guy who's made nothing but Heat ruduxes and Fockers flicks in the last decade. The guy who hasn't been in a decent film since 1997's Jackie Brown.

All kidding aside, the source material is good, and the trailer doesn't look half bad. Here's hoping.

*They can't even use the word bullshit in the synopsis! That's bullshit!

The MPAA should be strung up by their feet and beat with billy bats.

The tone of the trailer strikes me as completely wrong, but that's just my opinion.

EricMBacon from Vermont is reading The Autobiography of a Corpse November 16, 2011 - 4:35pm

I hate the MPAA. I am all for properly labeling movies so that adults and parents can make decisions, but censorship is bull$h*t. Yes, I just did that.

Anyway, there is a way to get around this. Fans can make their own movie posters and start some sort of underground campaign to promote the movie as Another Bullshit Night in Suck City. One of the problems with that sort of thing happening is that it is hard to get a dedicated following to promote something when they don't really know the quality of the movie, even if they adore the book (or maybe especially if they adore the book). The dedicated following comes after the release, and usually is the reason for high DVD sales (director's cut versions, unrated versions, etc.).

If the author cared, he could put up printable posters on his sight or give out t-shirts to wear to screenings. I'm just saying, there are ways around something like this. If the popular way to refer to this movie does become the title of the book and the average person knows what everyone is talking about, then the MPAA has lost.

Dean Blake from Australia is reading generationend.com November 17, 2011 - 3:37am

Is that Klitz from The Girl Next Door? :O