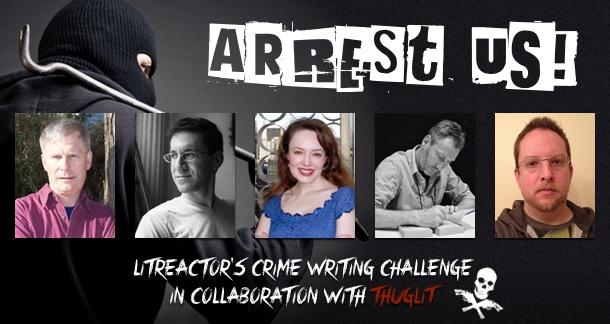 Arrest Us, our public crime fiction writing challenge, is chugging along nicely.

So we thought this would be a good time to announce our celebrity critiquers.

We've tapped some serious heavyweight authors and editors from the field of crime and mystery fiction. Each one of them will be sent a story, culled at random from the submissions ranked in the top 50 percent of the challenge.

Our celebrity critiquers will get the stories in August, will be given a few weeks leeway to read and review (to account for their hectic schedules), and will deliver, to the winners, their expert criticism.

Todd Robinson will pick three of the top-rated stories to run in Thuglit.

Mulholland, Broken River, Hard Case Crime, and MysteriousPress.com will each donate a grab-bag of books.

James Grady is the author of screenplays, articles and over a dozen critically acclaimed thrillers. In 1973, after years of acquiring rejection slips for short stories and poems, Grady sold his first novel: Six Days Of the Condor, a bestseller which was eventually adapted into Three Days of the Condor, a film starring Robert Redford. After moving to Washington, D.C., Grady worked for a syndicated columnist, investigating everything from espionage to drug trafficking. His body of work has won him France’s Grand Prix Du Roman Noir, Italy’s Raymond Chandler Award, and Japan’s Baka-Misu literary prize. Grady’s most recent novel is Mad Dogs (2006). He and his wife live in a suburb of Washington, D.C.

Bryon Quertermous has over a decade of publishing experience that includes work with traditional stalwarts, such as Random House, as well as more cutting-edge operations, like Harlequin’s digital-first imprint Carina Press. His most recent position was as the commissioning editor for Angry Robot’s crime fiction imprint Exhibit A Books. He's worked as a freelance editor for New York Times best selling authors and published the award-winning crime zine Demolition for four years. His short stories have appeared in Plots With Guns, Thuglit, and Crime Factory among others, and in the anthologies Hardcore Hardboiled, The Year’s Finest Crime and Mystery Stories, and Uncage Me. In 2003 he was shortlisted for the Debut Dagger Award from the UK Crime Writers Association. His first novel, Murder Boy, will be published by Polis Books in 2015.

Chris F. Holm’s work has appeared in a number of magazines and anthologies, including Ellery Queen’s Mystery Magazine, Needle: A Magazine of Noir, and The Best American Mystery Stories 2011. He’s been longlisted or nominated for a number of awards, including the Anthony, the Stoker, and the Derringer, and he’s even racked up some wins along the way. His critically acclaimed Collector trilogy blends fantasy with old-fashioned crime pulp, and his forthcoming thriller from Mulholland Books, The Killing Kind, is about a man who makes his living hitting hitmen, only to wind up a target himself. Chris lives in Portland, Maine.

Anthony Award–winning author Hilary Davidson’s latest book, Blood Always Tells, was just published. It’s her fourth novel but her first stand-alone, and it’s earning high praise. Publishers Weekly called it “riveting.” Her debut novel, The Damage Done, featuring travel writer Lily Moore, won the 2011 Anthony Award for Best First Novel, and the Crimespree Award for Best First Novel. Moore returned in the novels The Next One to Fall and Evil in All Its Disguises. Her award-winning short stories have appeared in publications like Ellery Queen Mystery Magazine, Thuglit, Spinetingler, and Needle: A Magazine of Noir. Hilary has been an At-Large Director on the National Board of the Mystery Writers of America since January 2012. She has also served on the MWA’s New York Board.

Charles Ardai is an award-winning crime writer, founder and editor of the acclaimed Hard Case Crime series of pulp crime novels, creator of the pioneering Internet service Juno, and a writer and producer on the SyFy television series Haven. His short fiction has appeared in numerous publications and anthologies, including The Year’s Best Horror Stories and Best Mystery Stories of the Year, and he won the Edgar Award in 2007 for his story The Home Front. His four novels include the Shamus Award-winning Songs of Innocence—called “an instant classic” by the Washington Post—and the Edgar and Shamus Award-nominated Little Girl Lost. Hard Case Crime, which Ardai created to revive the style of the paperback crime novels of the 1940s and 50s, has been featured at places like the Today show, NPR and the New York Times.

So what are you waiting for? There's still time to get in on this thing. The submission window closes July 1.