Announcement: Saying Goodbye to the LitReactor Community Board 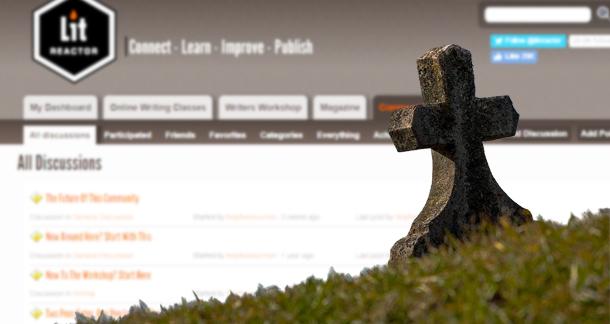 After much consideration and discussion, Team LitReactor has come to a decision: It’s time to close down the community discussion board.

Like a lot of you, I remember The Board of Old. Conversations so fast and passionate that it was almost like a live chat. Hilarious stories, discussions of Chuck’s work, writing challenges, random topics—it was an online space for all the weirdos who were just like me. The board at chuckpalahniuk.net, which evolved into LitReactor's board, was the first place that got me busted for misusing internet at the workplace, probably while chatting with someone about Dubliners or Cloud Atlas in the book club (both of which I read and couldn't make sense of, but damn it, I was still ready to argue about 'em!).

Some of the threads, like “Battle for the Last Post!,” have run for over 7 years and over 4,000 posts. The “Official Whoring Thread” has over 2,500 posts, all of them promoting the places we’ve been published, the books we’ve written, and the small successes that don’t come around too often in the writing life.

The Community was provocative. It was a spot where you could say things you might not be able to say anywhere else, and it was a great outlet for a lot of users.

And it was a good community. I can say that with certainty. In my years as Community Manager, I only had to bounce one user. And, boy, was he asking for it.

Full disclosure: It's painful to write about The Community in past tense.

The decision to shut the board has been made mostly due to slow activity. The resources, time, and work that go into maintaining the board, keeping it spam-free, and rousing interest have increased while participation has slowed to a trickle.

As of now, the plan is to lock the board for further comment and leave it standing. And if you’ve taken one of our online courses, don’t worry, this won’t affect the content you still have access to there, your comments on those discussions, or any of that material. You’ll also still see comments on columns, and all the magazine content and craft essays will remain unchanged.

We’re exploring other options to rebuild and reignite the discussions and passion of yore, and please keep an eye out for forthcoming details.

And thanks. Thanks for all the great conversations.

When I found out I'd be writing this farewell, I knew that the only fitting end would be from Denis Johnsons' Jesus' Son.

Thanks for being part of this with us. Thanks for the great conversations. And now, I'll leave it to Mr. Johnson:

I had never known, never even imagined for a heartbeat, that there might be a place for people like us.

It'll be missed. So many great WAR memories.

So sad. So many memories :(

An April Fools post I missed I take it? Nope published 4 days after my birthday.

No end quote for the song lyric?