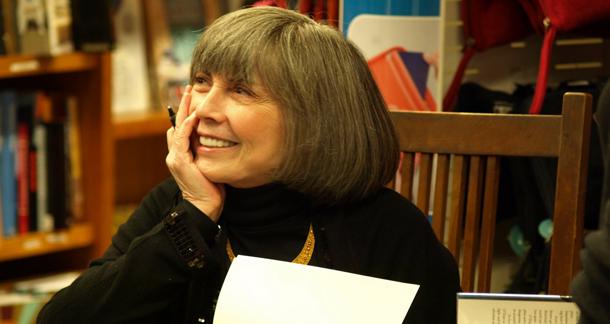 And no, this wasn't some side job on the way to becoming a big author. Rice was already enjoying success from Interview with a Vampire, and when her next couple of books failed to receive the same acclaim, she decided to return to her original interest in erotica and put out the Sleeping Beauty trilogy. And yes, the books were hugely successful.

So perhaps it shouldn't shock anyone that she's returning to the Roquelaure name and the erotica genre, as announced on her Facebook page. This time, she's being completely open about her identity as the author, and isn't shy about discussing her enjoyment of the genre.

In a 2012 interview with the Anne Rice Examiner, when asked why she decided to write “The Beauty” trilogy, Anne Rice says,” I wrote it because I thought most pornography was 1) Victorian classics revived and repackaged or 2) Hack work by people who didn't share the fantasy. So I decided to write the pornography I wanted to read, to prove that good S&M porn could be done without murder, burning, cutting or any kind of real physical harm; that a delicious pornography of detailed S&M games — dominance and submission, humiliation and love — could be made, all of it with elegance, refinement, and some romance. I created a fairytale kingdom of luxurious chambers, gorgeous costumes, and handsome and beautiful royal slaves, a world filled with romance, some intrigue and a lot of detail as to sexuality. I wanted it to be fun”.