Anne Rice Finally Getting Some of That Sweet, Sweet Vampire Money 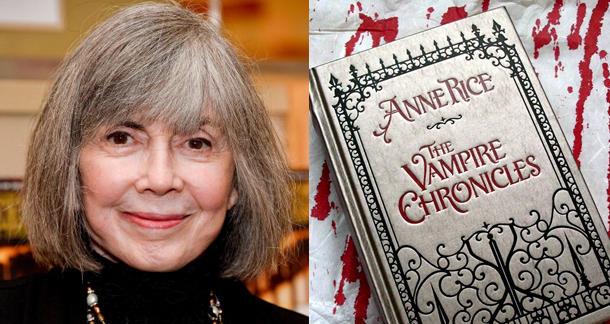 Image via The Wrap

Still waiting for a cinematic sequel to Neil Jordan's Interview with the Vampire adaptation? (The abysmal Queen of the Damned doesn't count.) Well, good news, everyone! Universal Pictures has acquired the rights to Anne Rice's Vampire Chronicles, in their entirety. This includes the forthcoming Prince Lestat.

But is the news really good? Image Entertainment and Brian Grazer are on board to produce, but they have tapped Alex Kurtzman and Robert Orci, of Transformers 2/Star Trek Into Darkness/Amazing Spider-man infamy to assist. Eh...

No word on whether The Cruiser will reprise his role as Lestat. Rice has already cast her vote for the ubiquitous Robert Downey Jr. to take over. Who would you want to see playing the toe-headed Brat Prince?

What about director? Of course, with the Grazer connection, the first person that comes to mind is Ron Howard, but I still can't picture little Opie Cunningham doing it.

I still need to read those. I'm leery about Vampires. (No, not because of Twilight.)

I look forward to this.

I kinda wish they were aiming for a TV show, though at the same time it's hard to do vampires on TV because actors age, while vampires don't. David Boreanaz was looking pretty jowly by the end of Buffy/Angel.

This kind of bums me out. Interview with the Vampire is one of my favorite films (I can't explain why, it just is). Lestat and Louis are supposed to be quite young, so I'm not sure why her casting choices are older. I've seen people suggest Dane Dehaan for Louis, but he has the look of Lestat to me. Evan Peters can pull off the charming/psychotic characters, and he matches the description except his eye color. Anne Rice wants Matthew Bomer for Louis. I love him, but he still seems too old for that role. Maybe they're planning to age them up, so the series won't be like all of the others? I don't know. I've got nothin' good.

The thing that kills me most is that they have to replace Kirsten Dunst as Claudia. She was the best part of the entire film.

Redd Tramp from Los Angeles, CA is reading Mongrels by SGJ; Sacred and Immoral: On the Writings of Chuck Palahniuk; The History of Sexuality by Michel Foucault August 9, 2014 - 7:47am

I'm optimistic. Christopher Rice (Anne Rice's son) has signed on to write the scripts for all of the Vampire Chronicles movies, and apparently she's really happy with that.
I think Robert Disney Jr. COULD do it, he's a great actor, but I'm having trouble imaging him playing a 300+ year old, undead French aristocrat. Tom Cruise did a good job in Interview, but in the other books, Lestat becomes much less of an insensitive asshole type vampire and more of a heartbroken immortal entity mourning the loss of his mortality. Cruise would need to step it up. Which he could. He's a great actor too.

Redd Tramp from Los Angeles, CA is reading Mongrels by SGJ; Sacred and Immoral: On the Writings of Chuck Palahniuk; The History of Sexuality by Michel Foucault August 9, 2014 - 7:51am

Oh and there would be no Claudia. I don't think they're remaking Interview, and the only time Claudia ever comes back around is in Lestat's dreams during Tale of the Body Thief.

Claudia also has a few scenes in Merrick.

I hope Universal will reboot Queen of the Damned. I liked QOTD (the book) just fine but I was absolutely enamored by The Vampire Lestat. To learn that Lestat's origin story was chopped up and used simply as a brief back story for the movie QOTD broke my literary heart.

As far as actors for the films...I could see Nicholas Hoult as Lestat but his acting skills might be more appropriate for the part of Louis. I agree that RDJ might be a tad bit old to play Lestat...plus I would be worried he would make Lestat more like Tony Stark/Sherlock Holmes; to me, they were too similar in character.