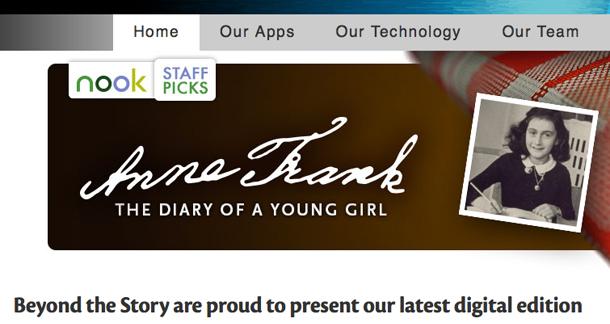 In commemoration of International Holocaust Remembrance Day, Penguin has released The Diary of a Young Girl, Anne Frank's widely read account of life in hiding, as an eBook app enhanced with video, photo and audio supplements. The app gives readers a wider understanding of the Frank family through historical and anecdotal information, including interviews with Miep Gies, who helped conceal the family from Nazis for two years, and who ultimately delivered Anne's recovered diary to her father, Otto Frank.

This new edition was created by Beyond the Story, a team of interactive book producers, in partnership with The Anne Frank Fund. Most of the photographs and video come from the archives of Otto, who was an avid shutterbug. The documents are currently held in Switzerland and maintained by Bernd Elias, aka Buddy, Anne's cousin and the only surviving relative to the Frank family. Quoted in The Guardian, Elias praised the rerelease:

I am happy to say that interest in Anna and her times is still strong, but bringing out this [book] now is highly important for the future of her story. The new material gives it a completely different outlook. It is a great thing that we have so much material available now for young people... Hatred, of course, and racism are still working away all over the world. They are with us. It is so important that children learn to respect all religions and all nationalities.

Among the new features, readers can view a 3D model of the warehouse annex that housed the Frank and Van Pels families, along with dentist Fritz Pfeffer. There's also a 'Story Trails' function that gives a detailed overview of the diary, as well as timelines for the Frank's journey and for World War II itself. The app is only available in the UK (a US release is forthcoming), but you can view photos and a breakdown of its features at The Next Web.

Some may argue these digital enhancements will distract readers from the original text, but in the above photos they don't appear at all obtrusive, and I think having a broader historical context for a work of this nature is overall beneficial to the reading experience.