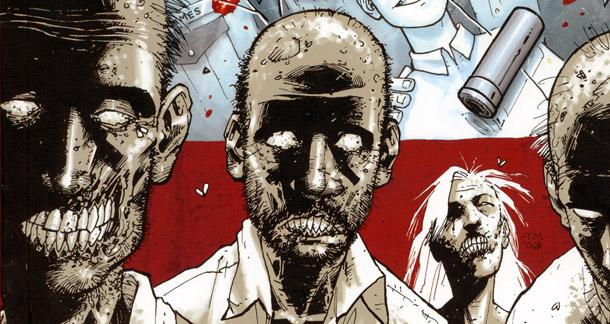 AMC plans to release a new TV series set in the same universe as its wildly popular The Walking Dead, The Huffington Post reports. Comic/series creator Robert Kirkman, along with producers Gale Anne Hurd and David Alpert are all on board, and the new show will debut sometime in 2015.

The network's president and general manager, Charlie Collier, called expanding/extending The Walking Dead a "no-brainer," and also referred to the series as "an entirely new story." Kirkman elaborated on this point:

"After 10 years of writing the comic book series and being so close to the debut of our fourth, and in my opinion, best season of the TV series, I couldn't be more thrilled about getting the chance to create a new corner of 'The Walking Dead' universe," Kirkman said in a statement. "The opportunity to make a show that isn't tethered by the events of the comic book, and is truly a blank page, has set my creativity racing.

So there you have it: an original story line, with brand new, never-before-seen characters. Though nothing of the sort was hinted, this news does make me wonder about the future of the original series. Maybe this is just Kirkman and AMC getting their ducks in a row early. Personally, I hope this companion series takes place in a large, west coast city, to add contrast to the mostly rural, southern setting of The Walking Dead.

I really enjoy AMC's The Walking Dead almost to cult status.  I manage to keep my fandom under control, but I was very excited to hear the news of a spinoff series... with the exception of one part - a 2015 release date.  Why so long, AMC?  I half expect that by 2015 the magic will be gone.  The zombie genre will have gone the way of the glittery vampire. Strike while the iron is hot, AMC.  The spinoff has a chance if AMC can maintain the pop-culture 'zombie frenzy'.  Tell riviting stories, hire amazing actors, keep the makeup and effects practical and of the highest quality.