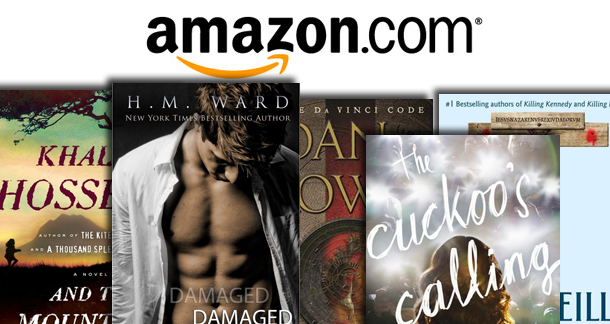 One of the things that’s almost as predictable as Jonathan Franzen spouting hate for the internet is the annual end-of-year lists. Now Amazon has released their list of the bestselling books for 2013 through its online stores. The results are somewhat predictable, but with a few surprises.

Dan Brown’s Inferno tops the list, followed by Khaled Hosseini’s And the Mountains Echoed and The Cuckoo’s Calling by Robert Galbraith (a.k.a. J.K. Rowling). The surprises come after those with The Husband’s Secret by Liane Moriarty in fourth and Lean In: Women, Work, and the Will to Lead by Sheryl Sandberg in fifth.

A press release from Amazon notes, "Lean In is the only book on the top 20 list to sell more print copies than Kindle editions."

Another surprise lurks further down the list, with an independent book (a “New Adult Romance”) at number 14.

These are entirely counted by copies sold, so it does reflect the market more closely than the list of “choices” Amazon published earlier this year. While it goes some way to proving that the whims of the marketplace don’t necessarily reflect the views of the critics, there are a few that support their choices. Have you bought any of these and contributed to the list?

You can see the full list as well as lists broken down into Adult, Children’s and Kindle books, here.

James Patterson has three books on this list.  I am amazed by that guy's output.

Correct me if I'm wrong, Utah, (and I very well may be as this was second hand info) but a buddy of mine who managed a book store told me that Patterson is basically a brand at this point, and that a lot of his books are written by partners and ghostwriters. This isn't to denegrate the man, but if that's true I wonder how much output the man truly generates (whatever it is, it's more than me).

Fair enough.  Regardless, his name is on a whole bunch of money at this point.  Excellent career management.

James Patterson often, if not most of the time, gets ghostwriters or collaborators to write the first draft under his direction, because he says he hates first drafts.  He then goes and edits and shapes it to form the book, ready for publishing.