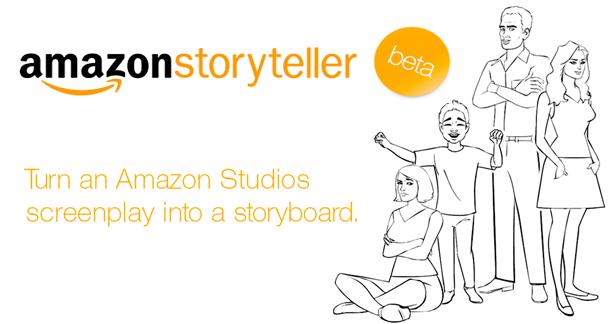 You may not know this, but in addition to being a retail juggernaut, Amazon is also a movie production studio. Well, at least they've got a dedicated arm of their octopus-like company called Amazon Studios, which accepts ideas for films and episodic series from users around the world. You submit your work, and hope that Amazon Studios picks it up.

Last week, the company-within-a-company released a new tool, Amazon Storyteller, which will automatically render storyboards for your uploaded screenplay, providing a higher levels of attractiveness and look-at-me quality. "We've found that many writers want to see their story up on its feet in visual form," Amazon Studios director Roy Price said (quoted from GalleyCat), "but find it harder than it should be to create a storyboard. Storyteller provides a digital backlot, acting troupe, prop department and assistant editor—everything you need to bring your story to life."

Here's an overview of how Storyteller works from Amazon's press release:

Storyteller begins by scanning a movie script that has been uploaded to Amazon Studios. It identifies the scenes, locations and characters from scene descriptions, and ‘casts’ them from a library of thousands of characters, props and backgrounds. Filmmakers can recast or change locations, or they can upload their own images. Storyteller places the cast in front of the right background so that filmmakers can focus their time on the emotion and energy of scenes by using pan and zoom, changing the facial expressions and positions of characters, adding vehicles or props or adding captions with descriptions or additional dialogue.

Storyteller is currently in beta and free to use. I attempted to try it out, but got frustrated with all the profile set-up I had to slog through and gave up. If you're already utilizing Amazon Studios, give this tool a try, and let us know what you think in the comments.