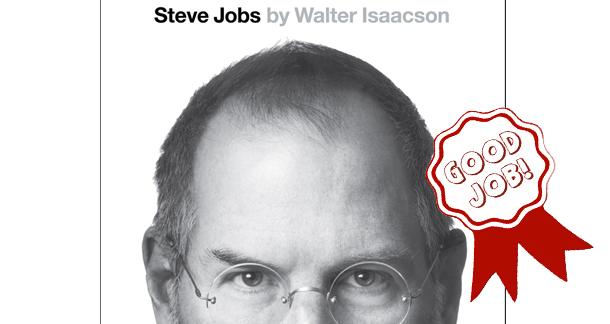 Amazon is out with its list of 10 best sellers for the year 2011. And leading the pack is Steve Jobs by Walter Isaacson--which only came out in October.

The rankings are for first editions that were published this year, and combine both print and digital sales.

“After the year of recommending books to our customers, it’s always fun to see what books really resonated with them. We chose Steve Jobs as one of the Top 10 best books of the year, and even though it was published in October, the sales have been phenomenal in both formats. And we’re really excited that Kindle Direct Publishing authors have taken two of the top spots this year for book sales overall.”

It's confusing because to say they "chose" Steve Jobs sort of indicates that maybe it didn't sell the most copies, and they're prognosticating that it will, or that they're grading on a curve? I don't know. Weird. Whatever. Who cares? Steve Jobs!

So for those keeping score at home: Six of these are fiction, though the top three are non-fiction. One is YA (Paolini), and two are self-published (Chan and Culver). And, as seems to be the case with this sort of thing, I haven't read any of these books (though there's a copy of Bossypants floating around my house, somewhere).

Chester Pane from Portland, Oregon is reading The Brief and Wondrous Life of Oscar Wao by Junot Diaz December 12, 2011 - 2:58pm

Two self-pubbed? Wow. I suppose I should really rethink some of my animosity toward Amazon. That is really cool.