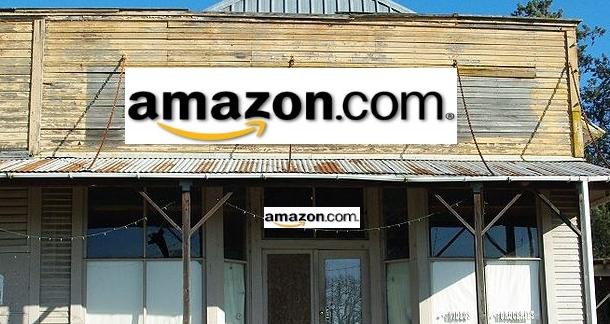 Via Good e-Reader, who may have landed one big scoop.

Recently, Barnes and Noble (and other major booksellers) declared that they absolutely will not sell Amazon published books in store, which has put the online retailer in a minor pickle--where would they stock their paper books in the real world? Apparently, the answer is: in an actual Amazon store. One which will only sell Amazon's 700ish titles, as well as Kindles and other Amazon-y stuff.

According to Good e-Reader, who seems to be the first site on this story, the mega-retailer-gone-publisher is tired of existing solely on the internet, and has decided to cough up the overhead to try out a few retail locations. Staffed by humans. Stocked with things made of paper. It's really sort of meta, when you think about it.

Rumors of actual Amazon locations have circulated before--but they always sort of conjure up the image of a "We Sell Your Stuff On E-Bay" store, and have never come to fruition. This, however, seems mildly legitimate. It also seems limiting--since, if they're only stocking their own books, there will be a lot of books that aren't there, which may be confusing to shoppers who have gotten used to Amazon having everything.

However, while it may be confusing to some consumers (who maybe don't even draw a distinction between "Amazon books" and "everyone else's books"), it may not be as bad for other brick-and-mortar booksellers as it seems, initially, since it's unlikely that any of those other stores would be putting Amazon's titles on the shelves, anyway.

Image: An approximation of what an Amazon store would look like, based on an image by M.O. Stevens in the Wikimedia Commons.

I'm gonna go in there with my iPhone and keep going on about how I'm finding everything cheaper on Amazon.

Thats like opening a video rental store after Netflix was created.

The whole idea is obsurd. Amazon has no experience in brick and mortar stores. I worked in one for years and I can tell you, only stocking 700 books - their books is equivalent to opening a Christian bookstore - literally, a one theme shop. Amazon is not going to get much traffic - especially since you can order those 700 titles online and have them delivered to your door.

Class Director
Rob from New York City is reading at a fast enough pace it would be cumbersome to update this February 6, 2012 - 3:01pm

@Jacki - Everyone said Apple opening retail stores was a huge mistake that would probably drive the company under. You never know how these things are going to shake out...

This falls under the category, "It's So Crazy, It Just Might Work". So long as the stores are at boutique size, it might generate enough traffic as a novelty. Plus, they could sell e-books in their brick and mortar store. Create a Kindle kiosk where you can search for books, purchase in store and have it sent right to your device. Not sure if the Kindle has an online store, as I don't own one, but that could be nice as a novelty. Instinct says nah, but crazier things have panned out.

This is actually a long time in coming. If you remember from back in the day, If you ordered a book at Borders or went online to Borders.com, Amazon was the one who fulfilled the order. The reason for this was Amazon has long considered opening retail locations and Borders had hopes Amazon would buy them, but Amazon balked due to Borders massive debts. But now that Borders is gone, Amazon can cherry pick the best locations and not incur things such as building costs. And chances are they'll carry everything, except for anything manufactured by B&N.

misterwoe from Kansas but living in Athens, Greece is reading Perdido Street Station by China Mieville, Inside the Third Reich by Albert Speer, A Wolverine is Eating My Leg by Tim Cahill February 7, 2012 - 2:21am

Nice line: "Staffed by humans. Stocked with things made of paper. It's really sort of meta, when you think about it."

I think it's probably a good idea for them to be trying this out. It's easy to think that this is just about books, but Amazon's product offering are so much greater than that. And, like Apple, they need a dedicated store front to make sure the public understand these products.

Yes, it will be nice for them to have some paper books, but I suspect the bulk of their floor-space will be dedicated to digital products.

For instance, they need a place to show off Kindles, to convince moms that it isn't hard to read off of (something I hear all the time from people who haven't held one).

They also need to show people the Kindle Fire.

Then, they have a whole bunch of services and products a lot of people forget about. For instance, they need to make people familiar with the Prime video-on-demand service as well as the products that natively support it.

They've got a ton of stuff to sell and educate their customers on besides books.

We all know that textbooks is undeniably expensive and college students are affected of this we are all aware that textbooks is the primary instrument for learning.For it help us to broaden our knowledge.Let the rejoicing start for Amazon book rental reaches hardcopies.Get more information at  Payday loan