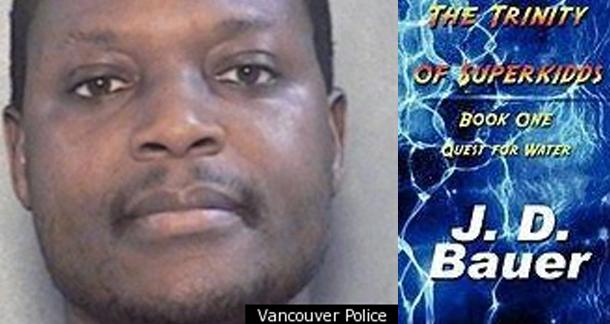 And apparently the author is a serial killer.

Charles Kembo was convicted of four counts of first-degree murder in June 2010 by a British Columbia Supreme Court jury. His victims were four adults killed between 2002 and 2005. Kembo was sentenced to life in prison, and will be eligible for parole in 25 years.

During an interview, Kembo said that the author, J.D. Bauer, is his pseudonym. He claims to have sold 14,000 copies of the book in the first two weeks that it was out, and that it's been optioned for a movie by an American movie studio (I bet!).

He also said that he prefers "to write in semi-darkness, alone in the nude." Because he is a serial killer, and they say things like that.

Parents and advocacy groups are in a tizzy over this, incensed that they could have been reading their kids a book written by hands that have taken someone's life.

Still no word from Publish America or Amazon on this. Though, Amazon should be used to it. They've been called to the carpet a few times over books they've sold, like The Pedophile's Guide to Love and Pleasure: A Child-Lover's Code of Conduct (ugh), an eBook that was later yanked from the store.

The Amazon page is already sporting some interesting reviews, like this one:

I know this book was written by a serial killer, but I will not rate it low because of who wrote it. I'm rating it by the book's own merits. It is a very interesting tale. While not the best book I've read, it was a good read nonetheless. To all those who are rating this book low and saying it should be taken off the site, just remember that some of our most famous authors were pedophiles and much much worse. If you don't like the guy, then hate the guy, not the book. If you never knew he wrote this, you would've bought it just as any other book.

No word on how much Kembo is profiting from the book (and I allow for the fact that, as a person who murdered a bunch of people, he could very well be lying, as the reporting so far doesn't seem to be rock-solid definitive). Though, I checked the Son of Sam law, which says that a criminal can't profit from crimes they've committed. So unless Kembo murdered those people on an epic adventure for water, it seems as though there's nothing barring him from seeing a profit.

So, what do you think? Should Amazon take it down?

Well, considering that it's from PublishAmerica, the chances that this guy is making any money off of it is between slim and none.

@Keith - LOL. And I never use that initialism.

I don't think they should take it down. He still has freedom of the press, and, as the article mentions, he isn't writing about his actual crimes. How many other artists have been through prison and still sold well? I don't know about murder, but I can list a few: Johnny Cash, Merle Haggard, Lil Kim and ODB, et al.

Sure, if you don't want your kid reading what could still be a decent story because of what the writer did previously, don't buy it. I don't think Amazon should remove his title completely. He is doing time already for his crimes.

I wouldn't have a problem reading the book to my kids, provided of course that it doesn't suck. I am not thrilled about a inmate that is doing hard time for violent crimes profitting off the thing though. Yes, I understand the story isn't about the crimes he committed, however his profits could be effected by his criminal history. Tell me this guy didn't have his background leaked to drum up controversy and boost sales. People are morbidly curious, if anything the negative publicity will likely help his sales, not hurt them.

Joshua Chaplinsky from New York is reading a lot more during the quarantine November 3, 2011 - 7:00pm

Any LitReactor writers want to try and score and interview?

I heard John Wayne Gacy painted really pretty pictures too.  They should make an art book or a post-humous recipe book from Jeffrey Dahmer.  Personally I think Charlie Manson could write the next Harry Potter, it's about a wizard who could see the bad humans who were 'piggies' and needed to be punished.

Joshua Chaplinsky from New York is reading a lot more during the quarantine November 4, 2011 - 7:48am

Well, Charles Manson's folk recordings are available on CD. I don't know if he makes any money off of them, but I don't think they have anything to do with his crimes, so maybe he does?

Yes, get an interview!  Sounds like a non-controversey to me.  Who are these parents keeping on the lives of authors of their children's books?