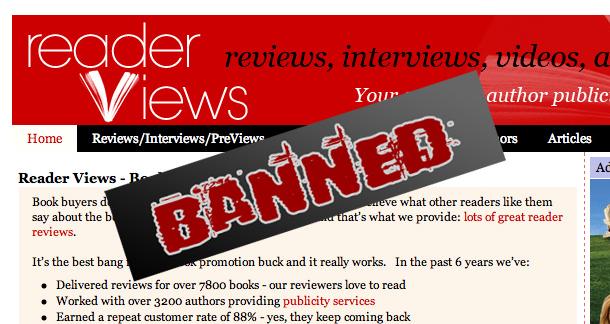 Amazon has banned reviews from a more than a dozen websites that offer paid reviews for books and other products. Let the battle of the First Amendment rights begin!

Okay, it's not that serious. But some people are still upset. Mostly the people who work for the publicity companies. Irene Watson, the founder of one of the targeted companies, Reader Views, defended her company to Galleycat, and said this was Amazon's attempt to squash competition, as the online retailer sells reviews in Kirkus for $379 to $529. She also warned that what started with a ban on sites like Reader Views has since spread to reviews from rank-and-file members.

But fake reviews are a controversial topic in the land of internet sales portals. As detailed in the New York Times, a research team from Cornell published a paper about creating a computer algorithm for detecting fake reviews, and were immediately approached by a dozen companies, including Amazon, Hilton and TripAdvisor. All of them want to stem the tide of false assessments. Customers don't take too kindly to them, either.

Reader Views is just another company that offers this kind of service--writing a kind review on a site like Amazon so your product (in this case, your book) looks a little better. From their site:

Book buyers don’t believe publisher’s book descriptions; they believe what other readers like them say about the book. Great reader reviews sell books - and that’s what we provide: lots of great reader reviews.

They do some reviews for free, but caution that due to the amount of submissions they get, those are limited. The only way to guarantee a review is the purchase a "budget friendly" Publicity Package, ranging from $199 to $499.

How much do reviews play into your purchase of a book/movie/product? Is it easy to sort the fake reviews from the real ones?

And, was it right for Amazon to ban Reader Views?

SGJ from Midland, Texas (but in Boulder, Colorado, now) is reading weird fiction and horror fiction and science fiction and literary fiction and innovative fiction, or maybe a romance or a western or a magazine on bowhunting or show trucks or anthropology December 1, 2011 - 2:47pm

I always hit the first few, and they do influence my one-clickiness, definitely. had no clue there were pay-services for reviews, though. or that Amazon sells their to Kirkus. the second doesn't bug me, and I guess the first doesn't strike me as that terrible (I'm always reluctant to badtalk people just for getting a check in a clever way). anyway, if Amazon bans this, then that just re-directs the cash stream or bitcoins or whatever to the independent operators, yeah? have keyboard, will praise. though of course writers are more likely to twist their friends and relatives arms for this kind of service, I suspect. or dummy up an acct to play critic on their own work (which, were I to do that, I'd only give negative reviews to myself, I'm sure, just from the paranoia of everybody seeing through the ruse).

also had no clue bots could write a review. though that seems a fun system to game: just figure what they're keying on, what they're sampling to regurgitate, and write accordingly. 'my audience's response is programmable.' kind of cool. so the 'code' you then write is disguised as prose. all kinds of fun, that. "can't come to dinner now, writing a story for a robot." I'm game.

Joshua Chaplinsky from New York is reading a lot more during the quarantine December 1, 2011 - 3:11pm

This is bullshit. Anyone who pays for a good review has questionable ethics and doesn't care about writing as an art form. I'd say this is almost as bad as plagiarism. It is false advertising.

Paying for reviews is like paying a woman to say that you're a good lay.

is it paying for someone to read your book and review it, or are these generic reviews with [insert author name]?

deciding whether or not to buy something based off a complete stranger's review is a step below buying it based on the back cover blurb.

Reviews are crutial, and for those of us who are functionally handicapped when it comes to detecting fake reviews (including yours truly), this is a blessing

Izzy Parker from Georgia is reading Hard-boiled Wonderland and the End of the World December 2, 2011 - 9:05am

Yeah, I think at the very least an effort needs to be made to keep the customer reviews Payola-free. Whenever I read reviews I make sure I read the negative feedback as well. Consistent complaints sometimes do influence my decision.

I generally check reviews on stuff like household products. For books, I get all my reviews from word of mouth. But, when I do read reviews I usually check a few of the good ones and a few of the bad ones. If the bad ones all point out similar issues, you can get a good idea of the quality when compared to the good reviews.

My habit at Amazon is to check the one-star reviews, if it is a product I am unfamiliar with. The one-star reviews are more likely to be sincere reviews, though it's true that competitors could use them to trash competing products. Another thing I do is to do a rough check of how the reviews are distributed; if there is a high percentage of bad reviews, it's likely that I won't want the product.

The above applies more to other things than books. When it comes to books, I tend to buy books that are by writers I'm already a fan of. But reviews have helped in me in that area as well; I remember reading a review that tipped me off to the fact that the book was self-published, and full of spelling and grammatical errors due to the lack of copyediting. That sort of thing keeps jerking me out of the story, so I knew not to buy the book.

I don't know what effect Amazon's new policy will have, but I don't think it will have much influence on my buying habits there, because I'm already fairly careful.