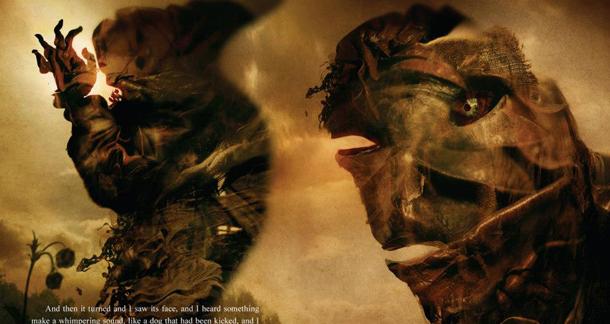 Ever since tweeting the title of his upcoming novel, fans of Neil Gaiman have been clamoring for new details about The Ocean at the End of the Lane, which will hit bookshelves in summer 2013. We got a good look at the cover art a few months ago, and now we have a taste of the artwork to appear inside the book. Dave McKean, who previously collaborated with Gaiman on Coraline and The Graveyard Book, unveiled some "visual moments" from Ocean's special edition.

Head on over to Tor.com for a peak. The images are quite stunning. They also contain several paragraphs of text, giving readers a glimpse into the story itself. The plot involves a boy enlisting three magical women to battle an ancient evil. Gaiman had this to say of his book:

The Ocean at the End of the Lane is a novel of childhood and memory. It’s a story of magic, about the power of stories and how we face the darkness inside each of us. It’s about fear, and love, and death, and families. But, fundamentally, I hope, at its heart, it’s a novel about survival.

In other news, anyone hoping to see Gaiman on a book signing tour should probably jump on it this summer. The author announced Tuesday on his blog that the tour for Oceans will be his last. He wrote:

They’re exhausting, on a level that’s hard to believe. I love meeting people, but the sixth hour of signing, for people who have been standing in a line for seven hours, is no fun for anybody...So I’m going to try and make this tour the glorious last US book signing tour, and then stop doing book signing tours for good.

Who's excited for The Ocean at the End of the Lane? Will anyone try to see him on his last tour?

dufrescm from Wisconsin is reading Do Androids Dream of Electric Sheep December 20, 2012 - 11:13am

I met Gaiman once, about 10 years ago.  He ate at a Japanese restaraunt where I was waitressing.  He worked on his laptop (writing a story?) the whole time.   I was too starstruck to ask for an autograph.  He was very nice, very polite, and tipped very well.

He hugged me in October and in doing so made my life exponentially better.

He's done "ninja signings" for a while, but doesn't typically announce them; the St. Mark's thing was a particularly long one. Any bookshop he visits, he signs some stock (so check for surprises!). He had a great anecdote a few months ago where he was signing stock of American Gods while shopping at an airport kiosk during a layover and the clerk, not knowing who he was, asked him to stop. Amanda had to show her the jacket photo.

The aperture Acts construction spokesperson needs to be attentive of how the Headliners construction is coming mutually.Wicked Is The Most Famous Musicals Show up early and pay awareness to the workflow. Monitoring the progress of the construction is critical.