All Your Money Are Belong To Us: Amazon's New Digital Battle Plan 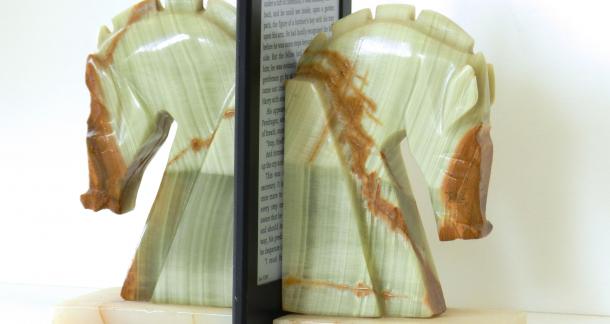 Kindle Unlimited, a subscription-based service, will give readers unlimited access to over 650,000 titles. Any number of these titles can be downloaded and read for a monthly fee of $9.99 a month. Just like streaming Netflix, you pay a regular fee and use the service as much as you choose.

Talking turkey, That's just about $1.75 more per month than Amazon Prime,  the service that goes for $99 annually and allows for free shipping on Amazon purchases, streaming video, all that good stuff. The move is significant as most new Amazon services have fallen under the Prime umbrella, but it would appear that Kindle Unlimited is blazing its own trail.

Oyster Books, another popular service with a similar model, offers about 500,000 titles for $9.95 per month, pretty close until one considers the big selling point with Kindle Unlimited: audiobooks. The current number of estimated audio titles is between 7,000 and 8,000, and in addition Amazon's Whispersync for Voice function would allow a person to read and listen to the same book, picking up from the same spot in text as they left off in the audio.

Would this be a savings for you or something you'd be interested in? What are the implications of having Amazon pick titles that are available for a service like this?

The first thing I'm asking is how does an author get their book included in this? It could be a great way to reach readers but Amazon like exclusivity, as proven by what they did with KDP Select (which personally I'd never sign up to.) It will indeed be interesting to see how they pick the titles for this if they decide to let indie authors have a chance to get their work included.

Let's be honest, I wouldn't consider audio books ever. It was a stretch for me to even consider e books. I'm only doing that because some books I want to have are out of print, and available as public domain.

I can see calling it listening to a story, but how can any honest person call that reading? (Yes, did I mention I was technologically conservative?)

I have my own feelings just on public domain. But that's beyond this scope.

I know people that have vision issues that rely upon audiobooks because they would not be able to read, otherwise. I know other people that have long commutes and prefer audiobooks to music, or to listen to when they exercise. Audiobooks don't replace reading, but they can be good in a pinch. Besides, since this service also gives you access to e-books, there is something there whether or not you are interested in audiobooks. My biggest question is about termination of the service. If you end your contract, I assume you lose all of the books that you have downloaded? Or, if the service turns out to be unprofitable and Amazon cuts it, do you all of the sudden find you've lost all your books? I already have Prime. This sounds a lot like the lending library concept that they already have, which has 500K books according to their site. The only benefit beyond that would be the audobooks. That being said, for no more than it is above what I already pay, I might be willing to do that. I just don't like the idea of not having the books when the service ends.

Dwayne from Cincinnati, Ohio (suburbs) is reading books that rotate to often to keep this updated July 17, 2014 - 1:03am

It could be neat to have some months.  Dip in, read a bunch of stuff I normally wouldn't pay a lot for, and end it after a month or two.

Or, you know, make use of yr local library.

Dwayne from Cincinnati, Ohio (suburbs) is reading books that rotate to often to keep this updated July 17, 2014 - 1:59pm

Not sure what to tell you if you can't see the flaws in that plan.

Someone always mentions libaries in things like this. I love the library. I have a pretty good one, but they are lacking in a lot of the small press stuff that seems to be included in Amazon Prime, and theoretically with this program. But a lot of people aren't even that lucky. I own more books than the library in the town I grew up in. The closest library otherwise was a forty mile drive, and wasn't exactly what people would consider a comprehensive collection.

Libraries are great, and Amazon is the devil. We get it. But the devil has things we want.

Dwayne from Cincinnati, Ohio (suburbs) is reading books that rotate to often to keep this updated July 19, 2014 - 9:44am

So I got the free trail on this, any suggestions?