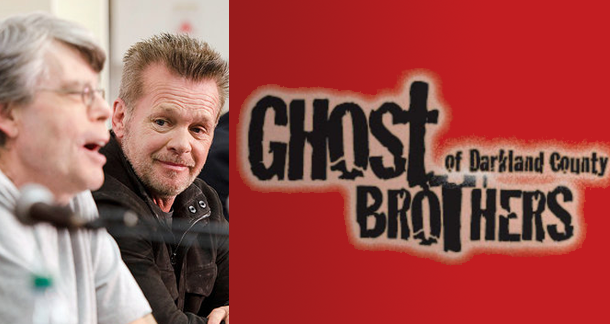 Some thirteen years ago, musician John Mellancamp discovered his cabin in Indiana was supposed to be haunted by two brothers who fought over a woman. One of them died, the other fled  with the woman, but they drowned when their car crashed into a lake. From the Guardian:

'I called up Stephen King and told him I wanted to make a musical out of the thing,' Mellencamp. 'It's outside both of our wheelhouses.'

King said he 'loved the idea they were brothers, and then years later history repeats itself. Something in that resonated with me deeply.'

The result is Ghost Brothers of Darkland County, a story of two brothers in similar situations, some 30 years apart. King wrote the story and Mellencamp, the songs. Its debut in Atlanta last April opened to mixed reviews, but the soundtrack has now been completed with such stars as Kris Kristofferson, Sheryl Crow and Elvis Costello - not to mention Mellencamp himself.

The creative pair are also talking about turning it into a film and possibly taking the show to Broadway. King’s not necessarily convinced it’ll make it, though:

'We were talking about Broadway right away,' King told Rolling Stone. 'John believes in reaching for the stars in everything he does … But a lot of Broadway these days is fucking Disneyland. It's blue-haired ladies from Westchester County. They come in buses and they want to see Aida or the Lion King. It's almost like an amusement park.'

I’m looking forward to hearing the soundtrack, with all these people on it, but I’m not sure what to think about the musical, though.