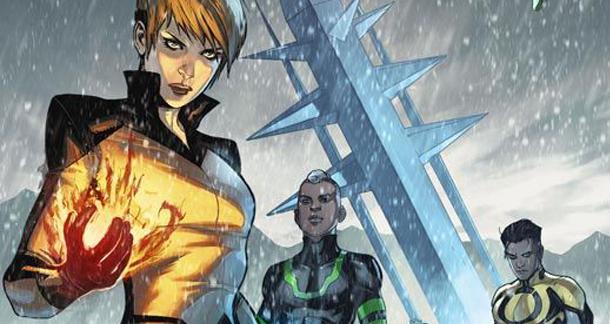 Get ready for one corner of the Marvel universe to expand! Come December, an all-new Inhumans comic series will hit shelves according to this update.

The series—helmed by writers Charles Soule and James Asmus and artist Stefano Caselli—will be the second ongoing comic in the Inhumans world, coupling forces with its sister title, Uncanny Inhumans. The plot revolves around a team led by Crystal that includes Gorgon, Flint, Naja, and Grid. The group will be investigating mysterious “Skyspears” (objects that enhance Inhumans’ power levels when in close proximity) as they begin to appear around the earth.

Asmus has more to say regarding the new plotline:

These stories follow a diplomatic mission/covert strike team effort led by Crystal. She’s been at the center of the Inhumans, but also served as an Avenger, alongside the Fantastic Four, and even dabbled with the X-Men when she was married to Quicksilver. She’s been a constant presence in the Marvel Universe, but leading this faction of NuHumans is her stepping up in a big way.

Soule has also mentioned that the Skyspears are connected to “larger ongoing plans for the Inhumans in significant ways.”

So how is this new Inhumans series different from Uncanny Inhumans? Asmus has the scoop. “For the most part, UNCANNY INHUMANS focuses on the more epic conflicts of the Inhuman Royal Family,” Asmus explained, “while our book focuses on the sudden explosion of NuHumans. Our stories, at first, will be a little smaller in scope, with deeply personal consequences for the characters. But we’re building up a cast and a portrait of the new Inhuman world that will soon have to go toe-to-toe with Marvel’s big boys in a very high-stakes way.”

The writer goes on to say, “I think this book being all about new blood and a new, complex era for the Inhumans makes it a perfect book for anyone who hasn’t ventured much into their corner of the Marvel mythology. I’ve been thrilled and excited by the way comics readership has broadened and invested themselves in new, rich, and genuinely diverse characters.  That kind of sincere complexity of characters, worlds, and ideas always defined my favorite books—and ALL-NEW INHUMANS has been a dream-come-true chance to do that kind fresh and expansive creation with Marvel.”

What do you think of this expansion to the Marvel universe?