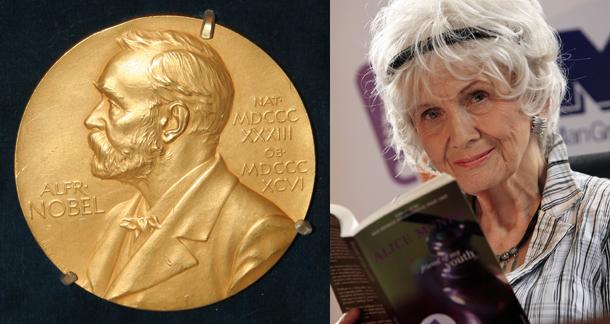 We have a winner! The Nobel Prize in Literature goes to Alice Munro, author of numerous short stories and collections, most of which are set in her native Ontario. According to Wikipedia, Munro is also the winner of the 2009 Man Booker Prize, again for her entire body of work, and a three-time recipient of Canada's Governor General's award for fiction. Her latest effort is Dear Life, published earlier this year.

On the Nobel's announcement page, Munro is referred to as a "master of the contemporary short story." As if this distinction was not enough to win such a prestigious award, the selecting committee elaborated on their choice of Munro. Here's an excerpt from GalleyCat:

Munro is acclaimed for her finely tuned storytelling, which is characterized by clarity and psychological realism. Some critics consider her a Canadian Chekhov. Her stories are often set in small town environments, where the struggle for a socially acceptable existence often results in strained relationships and moral conflicts – problems that stem from generational differences and colliding life ambitions. Her texts often feature depictions of everyday but decisive events, epiphanies of a kind, that illuminate the surrounding story and let existential questions appear in a flash of lightning.

The author also made a statement on her win:

This is so surprising and wonderful. I am dazed by all the attention and affection that has been coming my way this morning. It is such an honour to receive this wonderful recognition from the Nobel Committee and I send them my thanks … When I began writing there was a very small community of Canadian writers and little attention was paid by the world. Now Canadian writers are read, admired and respected around the globe. I’m so thrilled to be chosen as this year’s Nobel Prize for Literature recipient. I hope it fosters further interest in all Canadian writers. I also hope that this brings further recognition to the short story form.

If you're not familiar with Munro's work, GalleyCat also provides this link to her stories published in The New Yorker (note: some of the pieces are locked to subscribers only, but a handful are available for free).

Any Munro fans out there? How pleased are you with this announcement?

She should not have won... another embarrassement from my country's literary elite. Gross.