ALA List of 2014's Most Frequently Challenged Books Released 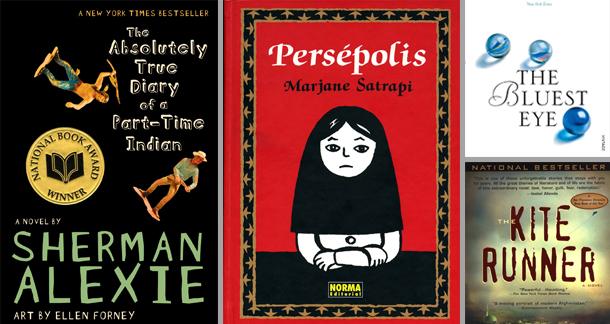 The American Library Association (ALA) has released a list of 2014’s most frequently challenged books.

According to the organization, the ALA’s Office for Intellectual Freedom (OIF) “received 311 reports regarding attempts to remove or restrict materials from school curricula and library bookshelves” over the course of 2014. The Absolutely True Diary of a Part-Time Indian by Sherman Alexie claims the top spot on the list.

The ALA went on to state, “The lack of diverse books for young readers continues to fuel concern,” and that “a current analysis of book challenges recorded by ALA’s Office for Intellectual Freedom (OIF) from 2001 – 2013, shows that attempts to remove books by authors of color and books with themes about issues concerning communities of color are disproportionately challenged and banned.”

A challenge, by definition, is the filing of a formal and written complaint with libraries or schools to demand a book’s removal or restriction due to its content or appropriateness.

And now, a list of the top ten most frequently challenged books along with the reasons they are being challenged, as outlined by the ALA (drum roll please):

I don’t know about you, but knowing a book has been challenged makes me want to read it even more! Will you be adding any of these works to your “To Read” list?

Every time I hear about banned or controversial books I lose a little more of my dwindling faith. The fear and laziness behind the attempts to suppress such works are indicative of a society with its head securely buried in the sand. Truth can be a troubling and scary thing, but it beats the shit out of ignorance.

I love that 'Saga' is "anti-family" - the whole comic series is about two people from different alien worlds, at war with each other, finding each other, bonding over love, producing a child, and then trying their hardest to protect the child. The step-parents even show-up and help.

I mean hell, it's pro-damn family!

Joshua Chaplinsky from New York is reading a lot more during the quarantine April 15, 2015 - 10:46am

Yeah, when I see word "gambling", I momently recall https://gamblingcomet.com/ with their perfect service. These guys always make me happy with the unfortunately good information and other specified tips.

Hey Viviani, I have a suggestion for you buddy. I can recommend you An Online Casino Website during this pandemic. If you are interested read Slotocash Casino Review in my blog. Thanks