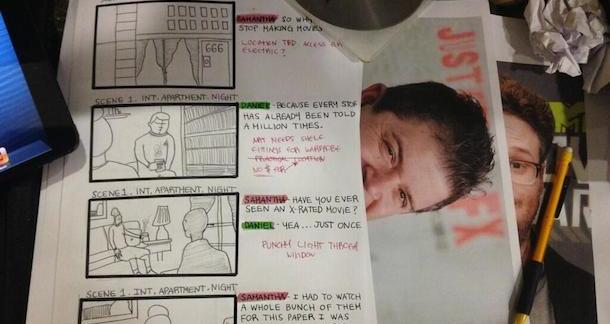 Shia LaBeouf, intellectual titan and star of film classics such as Holes and The Even Stevens Movie, has launched yet another salvo against Ghost World creator Daniel Clowes, a person who, by all accounts, has never upset anyone.

This saga has a bit of a back story, so I'll do my best to keep it LaBrief.

All of this started when LaBeouf's short film, Howardcantour.com, was posted online after making the rounds on the festival circuit. Observant viewers quickly drew comparisons between Howardcantour.com and Clowes' 2008 short story ​Justin M. Damiano. Upon further inspection, it turns out the film not only had many similarities to the story, but large sections of the film were lifted word for word, panel for panel from Clowes' work.

LaBeouf issued an apology via Twitter, an apology that itself seemed to be plagiarized from a Yahoo! Answers post. Then, the man who is most famous for his work in films where he co-stars with a robot that can turn itself into a truck issued further apologies, which were copied from other people's apologies

As accusations about the Clowes plagiarism flew, people began to look at LaBeouf's other work, particularly his self-published comics Let's Fucking Party and Stale N Mate. It didn't take much digging to find that parts of Let's Fucking Party had been lifted from works by poet and novelist Charles Bukowski, and portions of Stale N Mate had been taken from a novel by French novelist Benoît Duteurtre.

Because his apology on Twitter didn't seem to be enough, LaBeouf further apologized to Clowes via the most sane and logical way a person could apologize: skywriting.

After that, LaBeouf gave an interview to comics website Bleeding Cool. The website later discovered that many portions of his answers for that interview were...you guessed it, plagiarized from a myriad of other works.

With more and more accusations of plagiarism piling up for LaBeouf, online pundits began to openly wonder if he was doing all of this as some form of performance art, some kind of a commentary on remix culture and the idea that modern society makes every work of art ever instantly accessible and ready to be reinterpreted. As it stands, looking into that angle, it turns out that LaBeouf is probably just an asshole.

Now, the saga has a new wrinkle or two. On Wednesday, LaBeouf posted a storyboard from a project he's calling Daniel Boring, possibly a direct jab at Clowes' 2000 graphic novel David Boring. LaBeouf's description of the short as "Fassbinder meets half-baked Nabokov on Gilligan's Island" bears little resemblance to Clowes' work, but still, the title can't be seen as anything but yet another jab at Clowes.

Finally, just this morning, LaBeouf has announced that he is retiring from all public life, a move obviously plagiarized from greats such as J.D. Salinger, Howard Hughes and Thomas Pynchon.

What do you think? Plagiarist, jerk, troll, or all three?

Jerk. Sue hin into poverty and let/make him get a real job.

Dude is hilarious, how can you not feel the same way?  The lack of sincerity in celebrity and politician apologies is disgusting.  It just drips with the stench of obligation.  Most of the time, the apologies address the fact that someone became upset with their actions, NOT that their action was wrong in the first place.

Thus, I laugh every time I hear an update to this story.  Shia is taking it one step further and holding up the mirror to our over-apologetic, yet under-sincere society.  He walks in the shadow of pre-internet super-troll Andy Kaufman and I'm enjoying the show.

No talent. This is how he compensates for it. It's more of the decline of western civilization.

I don't see how plagiarism is such a big deal -- it definitely doesn't warrant the cessation of an artist's future work (by ruining their reputation or sueing them into oblivion). Just recognize it for what is it, maybe make it its own genre, and move on. Homage shouldn't be a sin.

Alexander, I have to say, what LaBeouf did with Howardcantour.com was not homage, it was pure plagiarism. He very clearly took words and imagery Clowes had created and passed it off as his own creation, without giving Clowes any credit for the original work.

If he had given Clowes credit for the original story, even if he hadn't gotten explicit rights to adapt it for the screen, this probably wouldn't have been that big of a deal...but the fact stands, he took someone else's work, and until he was forced to admit it, he gave zero indication that he had adapted it for his own purposes.

I'm all for sharing and remixing of works, and I think our copyright laws here in the US are way too restrictive, but that being said, plagiarism is plagiarism, copyright issue or not.

I've always seen him as a narcissistic egoist. I'm hoping that retirement from all things public is true, because then the possibility of him ruining "Y: The Last Man" by starring as Yorick Brown is non-existant.

Plagarism and homage are two totally different things. A little tip of the hat is fine. He stole large chunks of work, word for word. There is definitely a huge problem with that.

I am annoyed that the world has made me so skeptical that I actually wonder if Clowes is "in on it."

JYH i wondered the same thing. It would better explain LaDouche's mind-boggling idoiocy.

It has to be performance art/troll.  I find that idea easier to accept than him expecting to pass off the work of Daniel Clowes, Charles Bukowski, etc as his own.

Presumably the hours between Transformers gigs are long and hard to fill so this is what he's come up with.  Bing Crosby played golf (and if you haven't checked out his Transformers franchise then you really should).