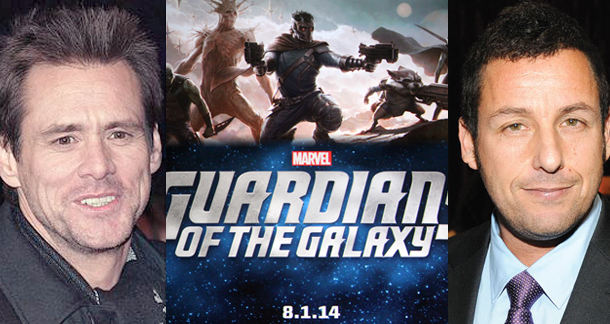 You know how rumours on the internet go: someone overhears something and posts it and then all hell breaks loose. From what we can tell, the rumor-mill has thrown up two potential names for Marvel’s Guardians of The Galaxy film — namely Jim Carrey and Adam Sandler.

According to Latino Review (a respected source for breaking Marvel news in recent years), the comic giant is considering the two comedic actors for roles in the film set to be released next year. No thing has been confirmed yet and it is unclear whether Sandler and Carrey are being considered for different roles or the same one.

For what roles, I’m not sure. Maybe Rocket or Groot? Jim Carrey I can see since he is already playing Colonel Stars & Stripes in Kick Ass 2, but Happy Gilmore (Adam Sandler) in a Marvel movie?! As they say on ESPN, “C’mon man!

While it would be good for Sandler’s career to be associated with the picture, we’ll have to wait and see whether this is going to happen or not. I don’t know, either of them would be an odd choice — what do you think?