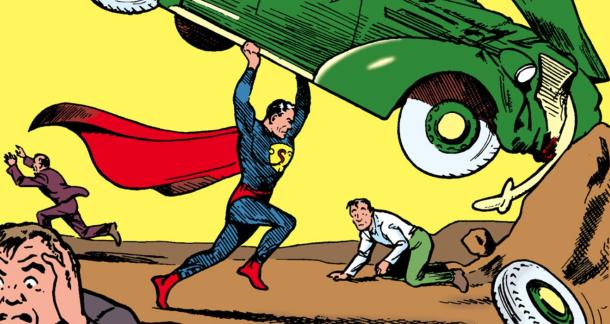 Thanks to an eBay auction of Action Comics #1, the first appearance of Superman, fans can read the entirety of the comic online.

The comic sold for $3,207,852 after it was graded by CGC, the leading authority in the field, and received a staggering 9.0 out of a possible 10, an almost-unheard-of grade for a comic in its 70s.

What makes this a truly good read is some of the bizarre parts of the Superman story, and also the wonder of what could have been.

Superman is, in some ways, similar to the hero you see today. He's unharmed by a gun, he maintains a secret identity, and Lois Lane makes an appearance. But, there are some strange bits, such as the fact that Superman doesn't actually fly, and the newspaper somehow gets breaking news reports about domestic abuse. That said, the Superman mold created decades ago seems to hold water even today.

The comic also brings up the question, why do some things catch fire while others don't?

What is it about Superman that captured so many imaginations while Chuck Dawson, rancher vigilante, didn't? Why was Sticky-Mitt Stimson never called up to the big leagues? Whatever happened to "Pep" Morgan, the young, hungry boxer? How has he stayed out of the limelight? How has he managed never to return with a bionic arm and a Soviet agenda?

Time will tell, I suppose. In the meantime, be sure to check it out.

I'm not sure when they first decided he could fly, but a lot of those early appearances he couldn't.

That's where the whole "Leap tall buildings in a single bound!" line came from. It is weird though why that line would stick even after they said he could just fly over the buildings.