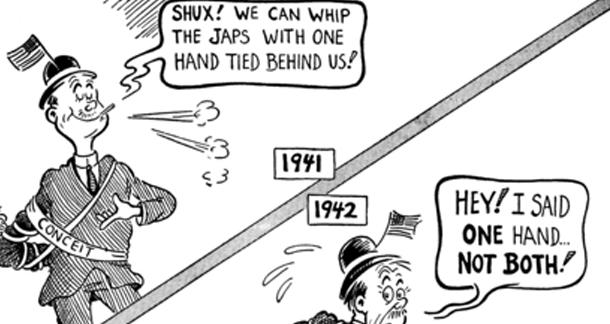 As the author of dozens of classic children's books, Theodor Seuss Geisel ( better known as Dr. Seuss) also moonlighted as a prolific political cartoonist during World War II. He created editorial cartoons for the left-leaning New York newspaper PM from 1941 to 1943, and now the Mandeville Special Collections Library at the University of California, San Diego houses the original newspaper clippings of more than 400 cartoons that Dr. Seuss drew for PM, plus a series of war bonds advertisements that appeared in other publications.

His work was more than just Green Eggs and Ham—his several hundred pieces offer unique depictions of issues around American racism, Nazism, the war, and politics. Seeing classic Seussian-style characters wearing swastikas and depicting a petulant "Adolfikins" rejecting milk from a non-Aryan cow is hilarious and stunning. You can view the entire catalog of his work here. 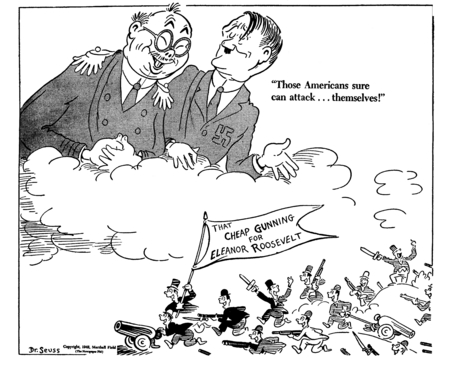 Part of what was very problematic about these Seuss cartoons was that they would depict caricatures of Hitler to represent Germany, and next to those, caricatures of a buck-toothed, pig-nosed, unidentifiable Asian male to represent Japan.  The white enemy - Hitler.  The yellow enemy - he could be anyone with Asian (?) features.  Send them all to Manzanar.

Joshua Chaplinsky from New York is reading a lot more during the quarantine June 6, 2012 - 3:16pm

Yeah, they are a tad racist.

Racially insensitive American political cartoons from the early 1940s? Good grief, and depicting the enemy in an unflattering light!

Joshua Chaplinsky from New York is reading a lot more during the quarantine June 7, 2012 - 5:58am

I wasn't condemning. I condone.

Oh, I didn't aim that at you, Josh — it was the post above yours that pulled a variation of the "Hitler" thing online, except instead of Auschwitz it was Manzanar (and therefore okay, one presumes...).