A Colorful Past: Gay History Book Stirs Tension In Russia 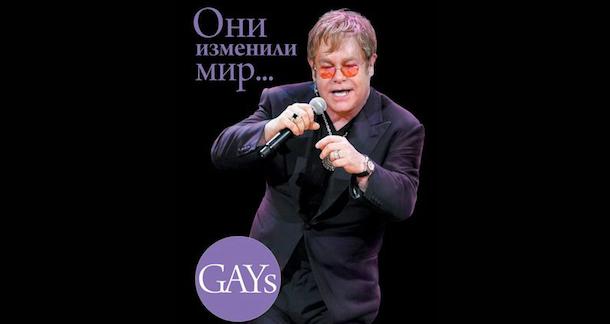 In a move that's surprising absolutely nobody, the Russian government is once again in the news for anti-gay behavior, this time in the form of book censorship.

Apparently, a lawyer named Alexander Lelikov spied the offending history tome in a bookstore, and was not too happy about its close proximity to the children's section. He is now calling for the book, titled GAYs: They Changed the World to be banned from being sold, and given Russia's widely-publicized legal moves against homosexuality, this ban could totally happen. After all, Lelikov labeled the book as "gay propaganda," a term which carries some legal weight in Russia at the moment.

I could say something sarcastic here, but I'm not sure I could top what Lelikov himself said. Below is Google's rough translation from the Russian source material; the [brackets] and strikethroughs are my attempts to clean it up for you:

According [to] Lelikova[,] it [was] "as if on purpose, released as candy, designed for the child." "I mean, bright artwork, a nice glossy paper," - he said. By the way, on the cover of the book depicts a singing Elton John. Lelikov coldly concluded: "The common thread is traced [to] a hidden thought, the answer to the question: why do [are] they (the characters in the book - writers, musicians) are so talented, well-known? - Because they are - gay!" Fluent[ly] leafing through the book, the lawyer came to the conclusion that it promotes non-traditional sexual relationships.

GAYs covers famous people in history who were gay, including Elton John (who is featured on the cover), Freddy Mercury, Oscar Wilde, Stephen Fry, and Russia's own Pyotr Tchaikovsky. So the way I'm reading it, all it's really doing is pointing out famous people, who also happened to be gay.

And if Russian officials are hilariously worried about children finding out that Elton John is gay, then banning a single book isn't going to solve anything. But I live to serve, so let me help find a picture of Elton that appropriately hides the "evils" of his homosexuality.

Okay, never mind. Russia will have to figure out how to hide Elton's homosexuality all by themselves. He isn't going to make it easy on them.