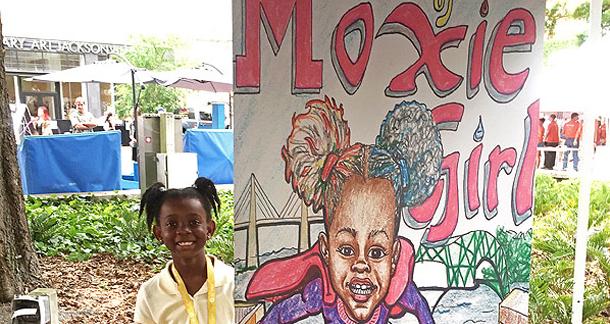 Natalie McGriff is just a normal 7-year-old girl, and like other children her age, she has her own insecurities—particularly her hair. Instead of staying silent about what she thought was a flaw, she turned it into something constructive: The Adventures of Moxie Girl, reports People.

The comic book features a young girl who becomes a superhero and fights evil with her hair’s special powers. Natalie created the graphic novel with the help of her mother, along with a local artist who illustrated the main protagonist after Natalie herself.

News of the project hit media outlets when the comic book won over $16,000 at One Spark, a crowd funding festival. The donations didn’t stop there; readers continued to show their support after the event on April 12th, raising over $17,000 total, and that number still grows.

The goal of the comic book seems to be one of altruism: the writers hope that turning one child’s insecurity into a superpower will teach other kids that what they see as flaws can also be strengths. “Everyone should be proud of who they are,” Natalie told People.

The comic will be published in late May. Natalie’s mother hopes to follow up its success by writing a second book featuring the girl’s cousin, whose hearing aids will be his superpower.