7 Books Challenged On The Eve Of Banned Books Week 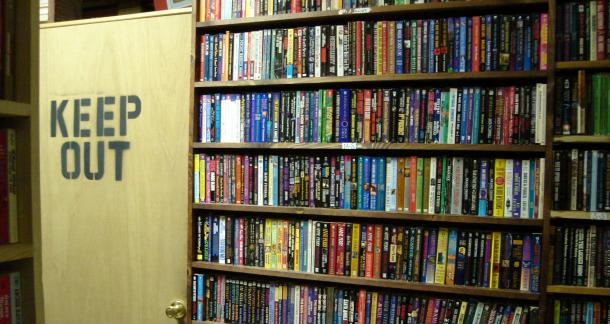 You'd think that this whole Banned Books Week business would be beating a dead horse. Who bans books anymore?

It turns out that horse is far from dead, and it is, in fact, rampaging all around Highland Park Independent School District in Dallas, TX like some sort of crazed, undead horse of moral justice.

Last month, more than 100 citizens packed a school board meeting, many of them with copies of books selected for Highland Park ISD reading lists. According to one article, they then read aloud passages that contained "sex scenes, references to homosexuality, a description of a girl’s abduction and a passage that criticized capitalism."

A reference to the mere existence of homosexuality is one thing, but I draw the line when it comes to criticizing capitalism. Even though it would appear that the criticism of capitalism likely comes from the title The Working Poor: Invisible in America, a book about the unfortunate fact that a person can work full-time in the United States and still be below the poverty line, a stance that seems 100% legitimate.

With their out-of-context quotes highlighted and marked, the meeting ended with a decision to suspend seven titles (The Art of Racing in the Rain, The Working Poor: Invisible in America, Siddhartha, The Absolutely True Diary of a Part-Time Indian, An Abundance of Katherines, The Glass Castle: A Memoir, and Song of Solomon) from the school's reading list pending a review by committees of parents, teachers, and students.

The opinions are all over the map, but are summed up well by a couple people. First, high school English teacher Darcy Young:

Meanwhile, on the other side of the coin, one parent asked that the English Department promote classics as opposed to the young adult fiction, as she feels classics can address the same topics with cleaner language and without having to "dumb down" literature.

It is important to note that this isn't a ban. Not entirely, anyway. What's being discussed is the removal of books from the curriculum, not from the hands of students. While students wouldn't study these in a classroom setting, they would be free to read them on their own and unguided.

High school books. What do you think? Should parents decide what does and does not belong on the curriculum? Are students harmed when they study these titles?

I remember studying 1984, which has almost every single one of those things in it, along with Macbeth, which is full of murder and violence, Of Mice and Men, Great Expectations, and poetry from the Second World War. I also remember being asked to write stories from characters of differing viewpoints and backgrounds, including varied age, sex, race, sexuality, and class. I also remember reading a couple of other books that I can't remember, one of which insinuated a rape scene, and another involved a boy getting very drunk as a result of his parents divorce and some new guy marrying his mother. I think children should be actively encouraged to read as much varied text as possible, without discrimination, to show them there is so much more to the world than simply what they have experienced to date, but that's just my opinion.

As long as they're not banning them from their libraries, I got no big deal with it.

Yeah, The Art of Racing in the Rain should be banned because it's a lousy book - no other reason needed!

Otherwise, thanks for nothing TX!!

Censorship, de faco or otherwise, is always a cause for concern. I actually grew up in Dallas, not far from Highland Park High School, but attended an Episcopalian Prep School that, curiously, was far more progressive about curricula than the non-denominational public schools.

The parent has a point about teaching more classics, I think.

Also, to the person above, book suppression and censorship happens everywhere. It is not unique to Texas.

And it's times like these underground fiction magazines are tempting, to advertise for banned books, and write about normal things that would get banned.

A novel about Johnny cakes and Penang curry. Noooo! Let's ban it!

OtterMan from New Jersey, near Philadelphia USA is reading Ringworlds Children September 26, 2014 - 7:27am

I actually think book bans are great! There is nothing so motivating to a young adult as the forbidden fruit. If you want young people to read something, tell them they can't. Make sure you list all the horrible reasons this book is too advanced or complex or controversial for their undeveloped minds. Your local underground book shop won't be able to keep it on the shelves... The publicity alone is worth pure gold, most of these kids would never even have heard of these books otherwise.

Community Manager
helpfulsnowman from Colorado is reading But What If We're Wrong? by Chuck Klosterman October 21, 2014 - 7:02pm

It's my opinion that schools should teach literature with the goal of creating readers, and a big part of the reading process is learning to select your own materials. Learning what you like and don't, and what offends you and what doesn't. Not what offends your parents and grandparents.