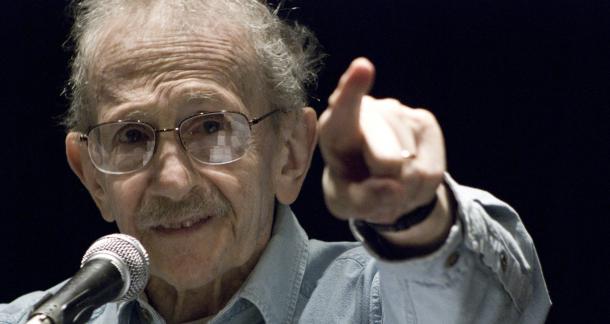 Here at LitReactor, we'd like to honor and celebrate Philip Levine with these 5 small remembrances.

1. Philip Levine Wrote About Detroit Before It Was Cool

Much of Levine's poetry was inspired by growing up in Detroit, much of it more factory floor than Walden Pond. Everything's got its place, but when he published his first collection in 1961, Levine showed the world that poetry wasn't all quiet, solitude, and dictionary words.

A section from this poem in which a man thinks he spots his brother:

How long has it been since you told him
you loved him, held his wide shoulders,
opened your eyes wide and said those words,
and maybe kissed his cheek? You’ve never
done something so simple, so obvious,
not because you’re too young or too dumb,
not because you’re jealous or even mean
or incapable of crying in
the presence of another man, no,
just because you don’t know what work is.

Take classes at the Iowa Writer's Workshop without registering? Cool. Refuse to pay taxes in protest of the Vietnam War? Cool.

4. Levine Was A Professor. The Best Kind.

I had the feeling he wrote many [kind, but critical] letters to young poets around the country: poets driving trucks, picking oranges, poets who were waiters and acupuncturists’ assistants and college students. Levine takes his role as mentor with the responsibility of a sacred vocation. He has sometimes had trouble from the administrations of high-tuitioned writing programs for allowing auditors—poets who were a little older, talented and too broke to pay—into his classes.

5. No Other Adult Remembered School Better Than Levine

Here's the entirety of "M. Degas Teaches Art And Science At Durfee Intermediate School, Detroit1942." And he's right. Any school day, it could go on forever.

He made a line on the blackboard,
one bold stroke from right to left
diagonally downward and stood back
to ask, looking as always at no one
in particular, "What have I done?"
From the back of the room Freddie
shouted, "You've broken a piece
of chalk." M. Degas did not smile.
"What have I done?" he repeated.
The most intellectual students
looked down to study their desks
except for Gertrude Bimmler, who raised
her hand before she spoke. "M. Degas,
you have created the hypotenuse
of an isosceles triangle." Degas mused.
Everyone knew that Gertrude could not
be incorrect. "It is possible,"
Louis Warshowsky added precisely,
"that you have begun to represent
the roof of a barn." I remember
that it was exactly twenty minutes
past eleven, and I thought at worst
this would go on another forty
minutes. It was early April,
the snow had all but melted on
the playgrounds, the elms and maples
bordering the cracked walks shivered
in the new winds, and I believed
that before I knew it I'd be
swaggering to the candy store
for a Milky Way. M. Degas
pursed his lips, and the room
stilled until the long hand
of the clock moved to twenty one
as though in complicity with Gertrude,
who added confidently, "You've begun
to separate the dark from the dark."
I looked back for help, but now
the trees bucked and quaked, and I
knew this could go on forever.

Thank you, Philip Levine. Rest with all the peace you've earned.

Players can easy to get and plat to earn free robux generator no survey no any sign required here.