47 New Ways To Say Goodbye: A Farewell To Arms Rereleased With New Endings 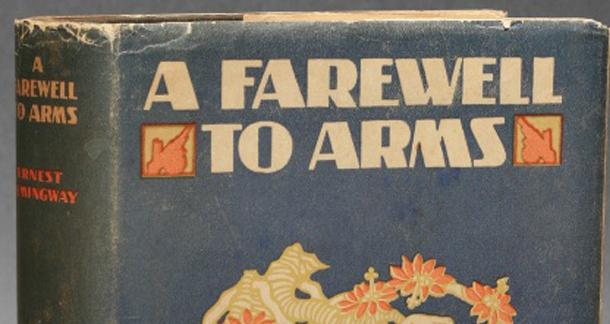 In a 1958 interview, Hemingway admitted that the final words of A Farewell to Arms, his wartime masterpiece, were rewritten “39 times before I was satisfied.” He could definitely write, but it seems he couldn't count, as researchers have since identified 47 different endings to his classic novel. These alternate endings have never been published—thankfully, a new edition will be released next week, including all the alternate material, along with early drafts of other passages in the book.

In the first attempt, “The Nada Ending,” Hemingway wrote, “That is all there is to the story. Catherine died and you will die and I will die and that is all I can promise you.”

The “Live-Baby Ending,” number seven, ends, “There is no end except death and birth is the only beginning.”

And in number 34, the “Fitzgerald ending,” suggested by Hemingway’s buddy F. Scott Fitzgerald, Hemingway wrote that the world, “breaks everyone,” and those, “it does not break it kills. It kills the very good and very gentle and the very brave impartially. If you are none of these you can be sure it will kill you too but there will be no special hurry.”

The new edition will also include a list of Hemingway's proposed alternate titles, such as “Love in War,” “World Enough and Time,” “Every Night and All” and, “Of Wounds and Other Causes.”

Wow. Despite reading the original several times, this new edition is definitely on the top of my list.

I feel ashamed I haven't picked up this book yet. I was going to soon but now I'm wondering if I should get this copy or just go to my local used book store.