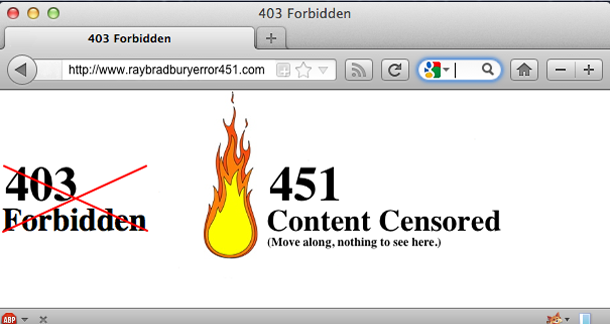 Most internet users are familiar with 404 errors—the messages you get when you've accidentally ridden your web surfboard over to a page that isn't there anymore (or never was). But not everyone knows that there's a whole list of HTML status codes for various things that can go wrong with your web experience. And most people are surprised to find that the internet is organized not by a cabal of cats in an underground lair, but by a group called the Internet Engineering Task Force (IETF), which helps maintain the web's structure through standards and continuity.

Next month, the IETF will review a proposal to add a new HTML status code to the internet: the 451. Named after Ray Bradbury's 1953 dystopian masterpiece, Fahrenheit 451, the new code would indicate that the user can't get to a page because it is being censored.

Currently, blocked sites display a "403 Forbidden" error, which indicates that the server you're trying to reach is refusing to honor your request to get to it, which is not true in the case of censored sites. Using the 403 error to indicate that a site has been blocked for legal reasons is like saying that your friend who lives on the tenth floor of an apartment building is refusing to answer the door when, in fact, the lobby security guy won't even let you get into the elevator. That lack of transparency is one of the main reasons that Bradbury fan, Google employee, XML co-inventor, and developer Tim Bray decided to submit a draft requesting the new code. He told The Guardian:

We can never do away entirely with legal restrictions on freedom of speech. On the other hand, I feel that when such restrictions are imposed, they should be done so transparently ... While we may agree on the existence of certain restrictions, we should be nervous whenever we do it; thus the reference to the dystopian vision of Fahrenheit 451 may be helpful. Also, since the internet exists in several of the many futures imagined by Bradbury, it would be nice for a tip of the hat in his direction from the net, in the year of his death.

Is this a good way to honor a man who called the internet "a big distraction"?

To quote Kent Brockman: "So I guess you could say, this barely qualifies as news."

I don't think Big Ray would care one way or the other, but it'd be cool to see. Who doesn't like Easter eggs?

Joshua Chaplinsky from New York is reading a lot more during the quarantine June 25, 2012 - 3:03pm

I think this is damn cool.